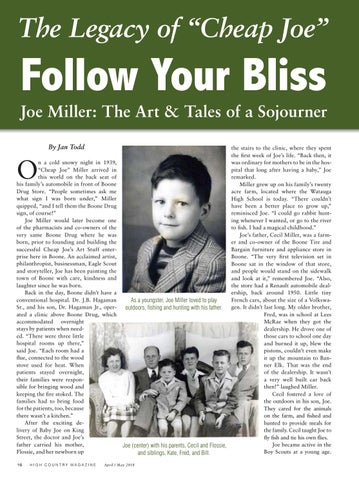 The Legacy of “Cheap Joe”

Joe Miller: The Art & Tales of a Sojourner By Jan Todd

n a cold snowy night in 1939, “Cheap Joe” Miller arrived in this world on the back seat of his family’s automobile in front of Boone Drug Store. “People sometimes ask me what sign I was born under,” Miller quipped, “and I tell them the Boone Drug sign, of course!” Joe Miller would later become one of the pharmacists and co-owners of the very same Boone Drug where he was born, prior to founding and building the successful Cheap Joe’s Art Stuff enterprise here in Boone. An acclaimed artist, philanthropist, businessman, Eagle Scout and storyteller, Joe has been painting the town of Boone with care, kindness and laughter since he was born. Back in the day, Boone didn’t have a conventional hospital. Dr. J.B. Hagaman Sr., and his son, Dr. Hagaman Jr., operated a clinic above Boone Drug, which accommodated overnight stays by patients when needed. “There were three little hospital rooms up there,” said Joe. “Each room had a flue, connected to the wood stove used for heat. When patients stayed overnight, their families were responsible for bringing wood and keeping the fire stoked. The families had to bring food for the patients, too, because there wasn’t a kitchen.” After the exciting delivery of Baby Joe on King Street, the doctor and Joe’s father carried his mother, Flossie, and her newborn up 16

the stairs to the clinic, where they spent the first week of Joe’s life. “Back then, it was ordinary for mothers to be in the hospital that long after having a baby,” Joe remarked. Miller grew up on his family’s twenty acre farm, located where the Watauga High School is today. “There couldn’t have been a better place to grow up,” reminisced Joe. “I could go rabbit hunting whenever I wanted, or go to the river to fish. I had a magical childhood.” Joe’s father, Cecil Miller, was a farmer and co-owner of the Boone Tire and Bargain furniture and appliance store in Boone. “The very first television set in Boone sat in the window of that store, and people would stand on the sidewalk and look at it,” remembered Joe. “Also, the store had a Renault automobile dealership, back around 1950. Little tiny French cars, about the size of a VolkswaAs a youngster, Joe Miller loved to play outdoors, fishing and hunting with his father. gen. It didn’t last long. My older brother, Fred, was in school at Lees McRae when they got the dealership. He drove one of those cars to school one day and burned it up, blew the pistons, couldn’t even make it up the mountain to Banner Elk. That was the end of the dealership. It wasn’t a very well built car back then!” laughed Miller. Cecil fostered a love of the outdoors in his son, Joe. They cared for the animals on the farm, and fished and hunted to provide meals for the family. Cecil taught Joe to fly fish and tie his own flies. Joe became active in the Joe (center) with his parents, Cecil and Flossie, Boy Scouts at a young age. and siblings, Kate, Fred, and Bill. 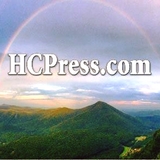