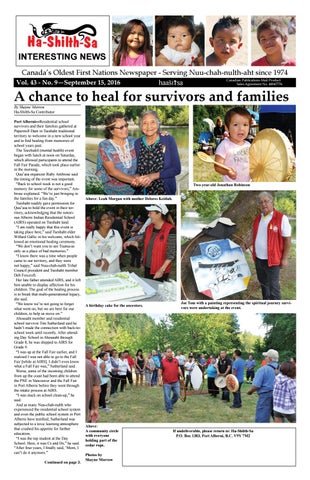 Port Alberni—Residential school survivors and their families gathered at Papermill Dam in Tseshaht traditional territory to welcome in a new school year and to find healing from memories of school years past. The Teechuktl (mental health) event began with lunch at noon on Saturday, which allowed participants to attend the Fall Fair Parade, which took place earlier in the morning. Quu’asa organizer Ruby Ambrose said the timing of the event was important. “Back to school week is not a good memory for some of the survivors,” Ambrose explained. “We’re just bringing in the families for a fun day.” Tseshaht readily gave permission for Quu’asa to hold the event in their territory, acknowledging that the notorious Alberni Indian Residential School (AIRS) operated on Tseshaht land. “I am really happy that this event is taking place here,” said Tseshaht elder Willard Gallic in his welcome, which followed an emotional healing ceremony. “We don’t want you to see Tsuma-as only as a place of bad memories.” “I know there was a time when people came to our territory, and they were not happy,” said Nuu-chah-nulth Tribal Council president and Tseshaht member Deb Foxcroft. Her late father attended AIRS, and it left him unable to display affection for his children. The goal of the healing process is to break that multi-generational legacy, she said. “We know we’re not going to forget what went on, but we are here for our children, to help us move on.” Ahousaht member and residential school survivor Tim Sutherland said he hadn’t made the connection with back-toschool week until recently. After attending Day School in Ahousaht through Grade 8, he was shipped to AIRS for Grade 9. “I was up at the Fall Fair earlier, and I realized I was not able to go to the Fall Fair [while at AIRS]. I didn’t even know what a Fall Fair was,” Sutherland said. Worse, some of the incoming children from up the coast had been able to attend the PNE in Vancouver and the Fall Fair in Port Alberni before they went through the intake process at AIRS. “I was stuck on school clean-up,” he said. And as many Nuu-chah-nulth who experienced the residential school system and even the public school system in Port Alberni have testified, Sutherland was subjected to a toxic learning atmosphere that crushed his appetite for further education. “I was the top student at the Day School. Here, it was Cs and Ds,” he said. “After four years, I finally said, ‘Mom, I can’t do it anymore.” Continued on page 3.

A birthday cake for the ancestors.

Above: A community circle with everyone holding part of the cedar rope. Photos by Shayne Morrow

Joe Tom with a painting representing the spiritual journey survivors were undertaking at the event.