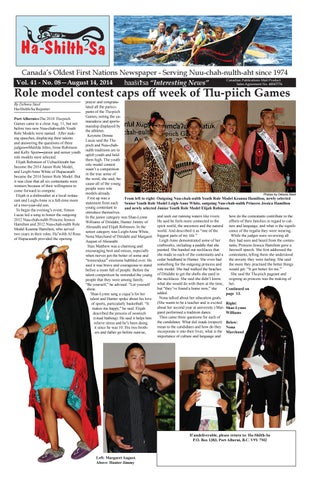 Role model contest caps off week of Tlu-piich Games By Debora Steel Ha-Shilth-Sa Reporter Port Alberni—The 2014 Tlu-piich Games came to a close Aug. 11, but not before two new Nuu-chah-nulth Youth Role Models were named. After making speeches, displaying their talents and answering the questions of three judges—Matilda Atleo, Irene Robinson and Kelly Sport—junior and senior youth role models were selected. Elijah Robinson of Uchucklesaht has become the 2014 Junior Role Model, and Leigh-Anne White of Hupacasath became the 2014 Senior Role Model. But it was clear that all six contestants were winners because of their willingness to come forward to compete. Elijah is a dishwasher at a local restaurant and Leigh-Anne is a full-time mom of a two-year-old son. To begin the evening’s event, Simon Lucas led a song to honor the outgoing 2012 Nuu-chah-nulth Princess Jessica Hamilton and 2012 Nuu-chah-nulth Role Model Keanna Hamilton, who served two years in their roles. Ha’wilth Al Ross of Hupacasath provided the opening

prayer and congratulated all the participants of the Tlu-piich Games, noting the camaraderie and sportsmanship displayed by the athletes. Keynote Donna Lucas said the Tlupiich and Nuu-chahnulth traditions are to uplift youth and hold them high. The youth role model contest wasn’t a competition in the true sense of the word, she said, because all of the young people were role models already. Photos by Debora Steel First up was a From left to right: Outgoing Nuu-chah-nulth Youth Role Model Keanna Hamilton, newly selected statement from each Senior Youth Role Model Leigh-Anne White, outgoing Nuu-chah-nulth Princess Jessica Hamilton young contestant to and newly selected Junior Youth Role Model Elijah Robinson. introduce themselves. and seek out running waters like rivers. how do the contestants contribute to the In the junior category was Shae-Lynne He said he feels more connected to the efforts of their families in regard to culWilliams of Ditidaht, Hunter Jimmy of spirit world, the ancestors and the natural ture and language; and what is the signifiAhousaht and Elijah Robinson. In the world. And described it as “one of the cance of the regalia they were wearing. senior category was Leigh-Anne White, While the judges were reviewing all Nona Marchand of Ditidaht and Margaret biggest parts of my life.” Leigh Anne demonstrated some of her they had seen and heard from the contesAugust of Ahousaht. craftworks, including a paddle that she tants, Princess Jessica Hamilton gave a Stan Matthew was a charming and painted. She handed out necklaces that farewell speech. She first addressed the encouraging host and emcee, especially she made to each of the contestants and a contestants, telling them she understood when nerves got the better of some and the anxiety they were feeling. She said “tremendous” emotions bubbled over. He cedar headband to Hunter. She even had the more they practised the better things said it was brave and courageous to stand something for the outgoing princess and role model. She had walked the beaches would get. “It got better for me.” before a room full of people. Before the of Ditidaht to get the shells she used in She said the Tlu-piich pageant and talent competition he reminded the young the necklaces. She said she didn’t know reigning as princess was the making of people that they were among family. what she would do with them at the time, her. “Be yourself,” he advised. “Let yourself but “they’ve found a home now,” she Continued on shine. added. page 13. Shae-Lynne sang a ciqua’a for her Nona talked about her education goals. talent and Hunter spoke about his love (She wants to be a teacher and is excited Right: of sports, particularly basketball. “It about her second year at university.) Mar- Shae-Lynne makes me happy,” he said. Elijah garet performed a tradition dance. Williams described the process of oosmich Then came three questions for each of (ritual bathing). He said it helps him the candidates. What did iisaak (respect) Below: relieve stress and he’s been doing mean to the candidates and how do they Nona it since he was 10. His two brothincorporate it into their lives; what is the Marchand ers and father go before sunrise, importance of culture and language and