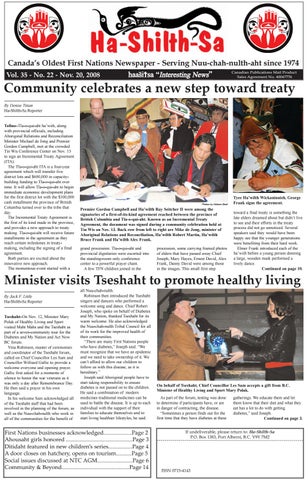 Community celebrates a new step toward treaty By Denise Titian Ha-Shilth-Sa Reporter Tofino–Tla-o-qui-aht ha’wiih, along with provincial officials, including Aboriginal Relations and Reconciliation Minister Michael de Jong and Premier Gordon Campbell, met at the crowded Tin Wis Conference Center on Nov. 13 to sign an Incremental Treaty Agreement (ITA). The Tla-o-qui-aht ITA is a four-year agreement which will transfer five district lots and $600,000 in capacitybuilding funding to Tla-o-qui-aht over time. It will allow Tla-o-qui-aht to begin immediate economic development plans for the first district lot with the $100,000 cash installment the province of British Columbia turned over to the tribe that day. The Incremental Treaty Agreement is the first of its kind made in the province, and provides a new approach to treaty making. Tla-o-qui-aht will receive future installments in the agreement as they reach certain milestones in treatymaking, including the signing of a final agreement. Both parties are excited about the innovative new approach. The momentous event started with a

Premier Gordon Campbell and Ha’wilth Ray Seitcher II were among the signatories of a first-of-its-kind agreement reached between the province of British Columbia and Tla-o-qui-aht. Known as an Incremental Treaty Agreement, the document was signed during a community celebration held at Tin Wis on Nov. 13. Back row from left to right are Mike de Jong, minister of Aboriginal Relations and Reconciliation, Ha’wilth Robert Martin, Ha’wilth Bruce Frank and Ha’wilth Alex Frank. grand procession. Tla-o-qui-aht and provincial dignitaries were escorted into the standing-room only conference center to a powerful prayer chant. A few TFN children joined in the

procession, some carrying framed photos of elders that have passed away:Chief Joseph, Mary Hayes, Ernest David, Alex Frank, Danny David were among those in the images. This small first step

Tyee Ha’wilth Wickaninnish, George Frank signs the agreement. toward a final treaty is something the late elders dreamed about but didn’t live to see and their efforts in the treaty process did not go unnoticed. Several speakers said they would have been happy see that the younger generations were benefiting from their hard work. Elmer Frank introduced each of the ha’wiih before a young person donning a large, wooden mask performed a lively dance. Continued on page 10.

Minister visits Tseshaht to promote healthy living By Jack F. Little Ha-Shilth-Sa Reporter Tseshaht–On Nov. 12, Minister Mary Polak of Healthy Living and Sport visited Maht Mahs and the Tseshaht as part of a seven-community tour for the Diabetes and My Nation and Act Now BC forum. Vina Robinson, master of ceremonies and coordinator of the Tseshaht forum, called on Chief Councillor Les Sam and Councillor Williard Gallic to provide a welcome everyone and opening prayer. Gallic first asked for a moments of silence to honor the war veterans as it was only a day after Remembrance Day. He then said a prayer in his own language. In his welcome Sam acknowledged all of the Tseshaht staff that had been involved in the planning of the forum, as well as the Nuu-chah-nulth who work in all of the communities for the benefit of

all Nuu-chah-nulth. Robinson then introduced the Tseshaht singers and dancers who performed a welcome song and dance. Chief Robert Joseph, who spoke on behalf of Diabetes and My Nation, thanked Tseshaht for its warm welcome. He also acknowledged the Nuu-chah-nulth Tribal Council for all of its work for the improved health of their communities. “There are many First Nations people who have diabetes,” Joseph said. “We must recognize that we have an epidemic and we need to take ownership of it. We can’t afford to allow our children to follow us with this disease, as it is hereditary.” Joseph said Aboriginal people have to start taking responsibility to ensure diabetes is not passed on to the children. He said a combination of modern medicines traditional medicines can be used to battle the disease. It is up to each individual with the support of their families to educate themselves and to start living healthier lifestyles, he said.

On behalf of Tseshaht, Chief Councillor Les Sam accepts a gift from B.C. Minister of Healthy Living and Sport Mary Polak. As part of the forum, testing was done to determine if participants have, or are in danger of contracting, the disease. “Sometimes a person finds out for the first time that they have diabetes at these

gatherings. We educate them and let them know that their diet and what they eat has a lot to do with getting diabetes,” said Joseph. Continued on page 3.