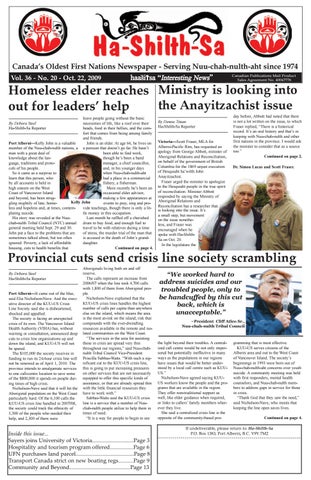 Homeless elder reaches Ministry is looking into the Anayitzachist issue out for leaders’ help leave people going without the basic necessities of life, like a roof over their By Debora Steel Ha-Shilth-Sa Reporter heads, food in their bellies, and the comfort that comes from being among family and friends. Port Alberni—Kelly John is a valuable John is an elder. At age 66, he lives on member of the Nuu-chah-nulth nations, a a pension that doesn’t go far. He hasn’t man with a great deal of been able to find work, knowledge about the lanthough he’s been a band guage, traditions and protomanager, a chief councillor, cols of his people. and, in his younger days So it came as a surprise to when Nuu-chah-nulth-aht learn that this person, who had a place in a commercial by all accounts is held in fishery, a fisherman. high esteem on the West More recently he’s been an Coast of Vancouver Island occasional elder advisor, and beyond, has been strugmaking a few appearances at Kelly John gling mightily of late; homeevents to pray, sing and proless and hopeless and, at times, contemvide teachings, though there is only a litplating suicide. tle money in this occupation. His story was revealed at the NuuLast month he raffled off a cherished chah-nulth Tribal Council (NTC) annual drum to buy food, and enough fuel to general meeting held Sept. 29 and 30. travel to be with relatives during a time John put a face to the problems that are of stress, the murder trial of the man that sometimes talked about, but too often is accused in the death of John’s grandignored: Poverty, a lack of affordable daughter. housing, cuts to health benefits that Continued on page 4.

By Denise Titian Ha-Shilth-Sa Reporter Victoria—Scott Fraser, MLA for Alberni-Pacific Rim, has requested an apology from George Abbott, minister of Aboriginal Relations and Reconciliation, on behalf of the government of British Columbia for the 1869 unjust execution of Hesquiaht ha’wilth John Anayitzachist. Fraser urged the minister to apologize to the Hesquiaht people in the true spirit of reconciliation. Minister Abbott responded by saying the Ministry of Aboriginal Relations and Reconciliation has a researcher that is looking into the issue. It’s a small step, but movement on the issue nonetheless, and Fraser was encouraged when he spoke with Ha-ShilthSa on Oct. 20. In the legislature the

day before, Abbott had noted that there is not a lot written on the issue, to which Fraser replied, “There is a historical record. It’s an oral history and that’s in keeping with Nuu-chah-nulth and other first nations in the province. I would ask the minister to consider that as a source too.” Continued on page 2.

Provincial cuts send crisis line society scrambling By Debora Steel Ha-Shilth-Sa Reporter Port Alberni—It came out of the blue, said Elia Nicholson-Nave. And the executive director of the KUU-US Crisis Line Society said she is disheartened, shocked and appalled. The society is facing an unexpected crisis of its own. The Vancouver Island Health Authority (VIHA) has, without warning or consultation, announced deep cuts to crisis line organizations up and down the island, and KUU-US will not be spared. The $105,000 the society receives in funding to run its 24-hour crisis line will not be renewed as of April 1, 2010. The province intends to amalgamate services to one call-centre location to save some of the $800,000 it spends on people during times of high crisis. Nicholson-Nave said that it will hit the Aboriginal population on the West Coast particularly hard. Of the 6,100 calls the KUU-US crisis line handled in 2007/08, the society could track the ethnicity of 5,300 of the people who needed their help, and 2,300 of them were

Aboriginals living both on and off reserve. The calls represent an increase from 2006/07 when the line took 4,700 calls with 1,800 of them from Aboriginal people. Nicholson-Nave explained that the KUU-US crisis lines handles the highest number of calls per capita than anywhere else on the island, which means the area is the most at-risk on the island; risk that compounds with the ever-dwindling resources available in the remote and isolated communities on the West Coast. “The services in the area for assisting those in crisis are spread very thin throughout our regions,” said Nuu-chahnulth Tribal Council Vice-President Priscilla Sabbas-Watts. “With such a significant cut to the KUU-US crisis line, this is going to put increasing pressures on other services that are not necessarily equipped to offer this specific kinds of assistance, or that are already spread thin with the little financial resources they have to work with.” Sabbas-Watts said the KUU-US crisis line is a service that a number of Nuuchah-nulth people utilize to help them in times of need. “It is a way for people to begin to see

“We worked hard to address suicides and our troubled people, only to be handcuffed by this cut back, which is unacceptable.” –President Cliff Atleo Sr., Nuu-chah-nulth Tribal Council

the light beyond their troubles. A centralized call centre would be not only impersonal but potentially ineffective in many ways as the populations in our regions have issues that would be better understood by a local call centre such as KUUUS.” Nicholson-Nave agreed saying KUUUS workers know the people and the programs that are available in the region. They offer non-traditional support as well, like elder guidance when required, or links to callers’ family members wherever they live. She said a centralized crisis line is the opposite of the community-based pro-

gramming that is most effective. KUU-US serves citizens of the Alberni area and out to the West Coast of Vancouver Island. The society’s beginnings in 1993 were born out of Nuu-chah-nulth-aht concerns over youth suicide. A community meeting was held with first responders, mental health counselors, and Nuu-chah-nulth members to address gaps in service for those in crisis. “Thank God that they saw the need,” said Nicholson-Nave, who insists that keeping the line open saves lives. Continued on page 4.