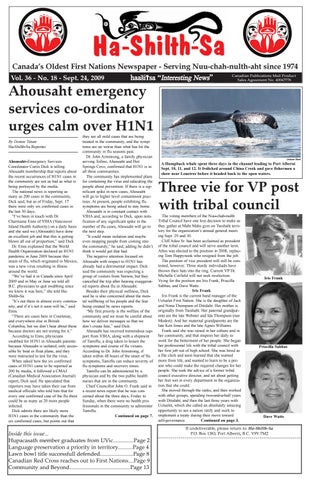 Ahousaht emergency services co-ordinator urges calm over H1N1 By Denise Titian Ha-Shilth-Sa Reporter Ahousaht–Emergency Services Coordinator Curtis Dick is telling Ahousaht membership that reports about the recent occurrences of H1N1 cases in the community are not as bad as what is being portrayed by the media. The national news is reporting as many as 200 cases in the community, Dick said, but as of Friday, Sept. 17 there were only six confirmed cases in the last 30 days. “I’ve been in touch with Dr. Charmaine Enns of VIHA (Vancouver Island Health Authority) on a daily basis and she said we (Ahousaht) have done an excellent job and that this is getting blown all out of proportion,” said Dick. Dr. Enns explained that the World Health Organization declared an H1N1 pandemic in June 2009 because this strain of flu, which originated in Mexico, was a new virus resulting in illness around the world. “We’ve had it in Canada since April 2009 and in May or June we told all B.C. physicians to quit swabbing since we knew it was here,” she told HaShilth-Sa. “It’s out there in almost every community, and if it’s not it soon will be,” said Enns. “There are cases here in Courtenay, and everywhere else in British Columbia, but we don’t hear about those because doctors are not testing for it.” According to Enns, physicians swabbed for H1N1 in Ahousaht patients because Ahousaht is isolated, only accessible by boat or float plane, and they were instructed to test for the virus. When asked how the six confirmed cases of H1N1 came to be reported as 200 by media, it followed a CMAJ (Canadian Medical Association Journal) report, Dick said. He speculated that reporters may have taken their cue from medical officials who told him that for every one confirmed case of the flu there could be as many as 20 more people infected. Dick admits there are likely more H1N1 cases in the community than the six confirmed cases, but points out that

they are all mild cases that are being treated in the community, and the symptoms are no worse than what has hit the community in flu seasons past. Dr. John Armstrong, a family physician serving Tofino, Ahousaht and Hot Springs Cove, confirmed that H1N1 is in all three communities. The community has implemented plans for containing the virus and educating the people about prevention. If there is a significant spike in new cases, Ahousaht will go to higher level containment practises. At present, people exhibiting flu symptoms are being asked to stay home. Ahousaht is in constant contact with VIHA and, according to Dick, upon notification of any significant spike in the number of flu cases, Ahousaht will go to the next step. “It could mean isolation and maybe even stopping people from coming into the community,” he said, adding he didn’t think it would get that bad. The negative attention focused on Ahousaht with respect to H1N1 has already had a detrimental impact. Dick said the community was expecting a group of visitors from Vernon, but they cancelled the trip after hearing exaggerated reports about flu in Ahousaht. Besides their physical wellness, Dick said he is also concerned about the mental wellbeing of his people and the fear being created by news reports. “My first priority is the welfare of the community and we must be careful about how we deliver messages so that we don’t create fear,” said Dick. Ahousaht has received tremendous support from VIHA, along with a shipment of Tamiflu, a drug taken to lessen the symptoms and course of flu viruses. According to Dr. John Armstrong, if taken within 48 hours of the onset of flu symptoms, Tamiflu can reduce severity of flu symptoms and recovery times. Tamiflu can be administered by a physician and by the two public health nurses that are in the community. Chief Councillor John O. Frank said in a recent news report that he was concerned about the three days, Friday to Sunday, when there were no health professionals in the community to administer Tamiflu. Continued on page 7.

A Humpback whale spent three days in the channel leading to Port Alberni Sept. 10, 11, and 12. It frolicked around China Creek and gave fishermen a show near Lonetree before it headed back to the open waters.

Three vie for VP post with tribal council The voting members of the Nuu-chah-nulth Tribal Council have one less decision to make as they gather at Maht Mahs gym on Tseshaht territory for the organization’s annual general meeting Sept. 29 and 30. Cliff Atleo Sr. has been acclaimed as president of the tribal council and will serve another term. Atleo was elected to the position in 2008, replacing Tom Happynook who resigned from the job. The position of vice president will still be contested, however. Three sturdy individuals have thrown their hats into the ring. Current VP Dr. Michelle Corfield will not seek re-election. Vying for the position are Iris Frank, Priscilla Sabbas, and Dave Watts. Iris Frank Iris Frank is the current band manager of the Ucluelet First Nation. She is the daughter of Jack and Nona Thompson of Ditidaht. Her mother is originally from Tseshaht. Her paternal grandparents are the late Webster and Ida Thompson (nee Modest). And her maternal grandparents are the late Ken Jones and the late Agnes Williams. Frank said she was raised in her culture and in her community, and that inspires her daily to work for the betterment of her people. She began her professional life with the tribal council with her first job out of high school. She was hired as a file clerk and soon learned that she wanted more from life, and wanted to learn to be a person who could make the required changes for her people. She took the advice of a former tribal council executive director, and set about getting her feet wet in every department in the organization that she could. She moved through the ranks, and then worked with other groups, spending two-and-a-half years with Ditidaht, and then the last three years with Ucluelet, which she called an absolutely amazing opportunity to see a nation ratify and work to implement a treaty during their move toward self-governance. Continued on page 3.