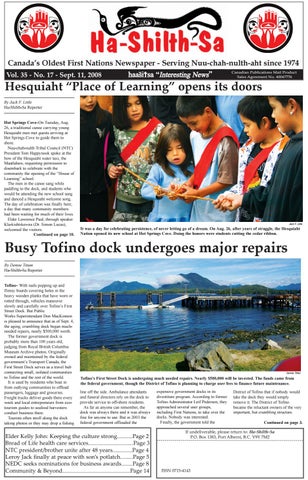 Hesquiaht “Place of Learning” opens its doors By Jack F. Little Ha-Shilth-Sa Reporter Hot Springs Cove–On Tuesday, Aug. 26, a traditional canoe carrying young Hesquiaht men met guests arriving at Hot Springs Cove to guide them to shore. Nuu-chah-nulth Tribal Council (NTC) President Tom Happynook spoke at the bow of the Hesquiaht water taxi, the Maatlahaw, requesting permission to disembark to celebrate with the community the opening of the “House of Learning” school. The men in the canoe sang while paddling to the dock, and students who would be attending the new school sang and danced a Hesquiaht welcome song. The day of celebration was finally here; a day that many community members had been waiting for much of their lives. Elder Lawrence Paul, through speaker Kla-kisht-kei-iss (Dr. Simon Lucas), welcomed the visitors. Continued on page 10.

It was a day for celebrating persistence, of never letting go of a dream. On Aug. 26, after years of struggle, the Hesquiaht Nation opened its new school at Hot Springs Cove. Doing the honors were students cutting the cedar ribbon.

Busy Tofino dock undergoes major repairs By Denise Titian Ha-Shilth-Sa Reporter Tofino– With nails popping up and flimsy boards covering holes in the heavy wooden planks that have worn or rotted through, vehicles maneuver slowly and carefully over Tofino’s First Street Dock. But Public Works Superintendant Don MacKinnon is pleased to announce that as of Sept. 4, the aging, crumbling dock began muchneeded repairs, nearly $500,000 worth. The former government dock is probably more than 100 years old, judging from Royal British Columbia Museum Archive photos. Originally owned and maintained by the federal government’s Transport Canada, the First Street Dock serves as a travel hub connecting small, isolated communities to Tofino and the rest of the world. It is used by residents who boat in from outlying communities to offload passengers, luggage and groceries. Freight trucks deliver goods there every week and local entrepreneurs from ecotourism guides to seafood harvesters conduct business there. Tourists often stroll along the dock taking photos or they may drop a fishing

Tofino’s First Street Dock is undergoing much needed repairs. Nearly $500,000 will be invested. The funds came from the federal government, though the District of Tofino is planning to charge user fees to finance future maintenance. line off the side. Ambulance attendants and funeral directors rely on the dock to provide service to off-shore residents. As far as anyone can remember, the dock was always there and it was always free for anyone to use. But in 2003 the federal government offloaded the

expensive government docks in its divestiture program. According to former Tofino Administrator Leif Pederson, they approached several user groups, including First Nations, to take over the docks. Nobody was interested. Finally, the government told the