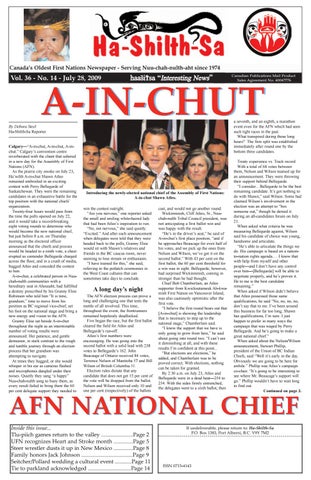 a seventh, and an eighth, a marathon event even for the AFN which had seen such tight races in the past. What transpired during those long hours? The firm split was established immediately after round one by the bottom three candidates.

Calgary—“A-in-chut, A-in-chut, A-inchut.” Calgary’s convention centre reverberated with the chant that ushered in a new day for the Assembly of First Nations (AFN). As the prairie city awoke on July 23, Ha’wilth A-in-chut Shawn Atleo remained embroiled in an exciting contest with Perry Bellegarde of Saskatchewan. They were the remaining candidates in an exhaustive battle for the top position with the national chiefs’ organization. Twenty-four hours would pass from the time the polls opened on July 22, and it would take a record-breaking eight voting rounds to determine who would become the new national chief, but just before 8 a.m. on Thursday morning as the electoral officer announced that the chiefs and proxies would be headed to a ninth vote, a cheer erupted as contender Bellegarde charged across the floor, and in a crush of media, hugged Atleo and conceded the contest to him. A-in-chut, a celebrated person in Nuuchah-nulth communities with a hereditary seat in Ahousaht, had fulfilled a destiny prescribed by his Granny Elsie Robinson who told him “It is time, grandson;” time to move from his position as BC regional vice-chief, set his foot on the national stage and bring a new energy and vision to the AFN. Granny Elsie sat beside A-in-chut throughout the night as an interminable number of voting results were announced. Her patience, and gentle demeanor, in stark contrast to the rough and tumble journey through an election process that her grandson was attempting to navigate. At times they hugged, or she would whisper in his ear as cameras flashed and microphones dangled under their noises. Quietly they sang “a happy” Nuu-chah-nulth song to buoy them, as every result failed to bring them the 60 per cent delegate support they needed to

Introducing the newly-elected national chief of the Assembly of First Nations: A-in-chut Shawn Atleo. win the contest outright. “Are you nervous,” one reporter asked the small and smiling white-haired lady that had been Atleo’s inspiration to run. “No, not nervous,” she said quietly. “Excited.” And after each announcement when delegates were told that they were headed back to the polls, Granny Elsie would sit with Shawn’s relatives and friends in the BC caucus room, never seeming to lose stream or enthusiasm. “I have trained for this,” she said, referring to the potlatch ceremonies in the West Coast cultures that can sometimes take days to conclude.

A long day’s night The AFN election process can prove a long and challenging one that tests the mettle of all involved. This time, throughout the event, the frontrunners remained hopelessly deadlocked. Five began the race, but the first ballot cleared the field for Atleo and Bellegarde’s run-off. Atleo’s first numbers were encouraging. He was going into the second ballot with a solid lead with 238 votes to Bellegarde’s 162. John Beacauge of Ontario received 84 votes, Terrence Nelson of Manitoba 57 and Bill Wilson of British Columbia 11. Election rules dictate that any candidate that does not get 15 per cent of the vote will be dropped from the ballot. Nelson and Wilson received only 10 and one per cent (respectively) of the ballots

cast, and would not go another round. Wickinninish, Cliff Atleo, Sr., Nuuchah-nulth Tribal Council president, was not anticipating a first ballot win and was happy with the result. “He’s in the driver’s seat,” he said of A-in-chut’s first place position, “and if he approaches Beaucage for even half of his votes, and we pick up the ones from Nelson and Wilson, we’ve got it on the second ballot.” With 43 per cent on the first ballot, the 60 per cent threshold for a win was in sight. Bellegarde, however, had surprised Wickinninish, coming in stronger than he had thought. Chief Bob Chamberlain, an Atleo supporter from Kwicksutaineuk Ah-kwamish First Nation on Vancouver Island, was also cautiously optimistic after the first vote. “I believe the first round bears out that [A-in-chut] is showing the leadership that is necessary to step up to the national stage,” Chamberlain said. “I know the support that we have is only going to grow from here,” he said about going into round two. “I can’t see it diminishing at all, and with these results I’m confident at this point... “But elections are elections,” he added, and Chamberlain was to be proved correct. With elections, nothing can be taken for granted. By 2:30 a.m. on July 23, Atleo and Bellegarde were in a dead heat—254 to 254. With the sides firmly entrenched, the delegates went to a sixth ballot, then

Treaty experience vs. Track record With a total of 68 votes between them, Nelson and Wilson teamed up for an announcement. They were throwing their support behind Bellegarde. “I consider... Bellegarde to be the best remaining candidate. It’s got nothing to do with Shawn,” said Wilson. Some had claimed Wilson’s involvement in the election was an attempt to “box someone out,” though he denied it during an all-candidates forum on July 21. When asked what criteria he was measuring Bellegarde against, Wilson said his candidate of choice was young, handsome and articulate. “He’s able to articulate the things we do. His campaign is based on a nationto-nation rights agenda…. I know that with help from myself and other people—and I don’t have any control over him—[Bellegarde] will be able to negotiate properly, and he’s proven it. He to me is the best candidate remaining.” When asked if Wilson didn’t believe that Atleo possessed those same qualifications, he said “No, no, no, no, don’t say that to me. I’ve been around this business for far too long. Shawn has qualifications, I’m sure. I just happen to prefer in many ways the campaign that was waged by Perry Bellegarde. And he’s going to make a great national chief.” When asked about the Nelson/Wilson announcement, Stewart Phillip, president of the Union of BC Indian Chiefs, said “Well it’s early in the day. Obviously we are going to be here for awhile.” Phillip was Atleo’s campaign co-chair. “It’s going to be interesting to see where Mr. Beaucage’s support will go.” Phillip wouldn’t have to wait long to find out. Continued on page 3.