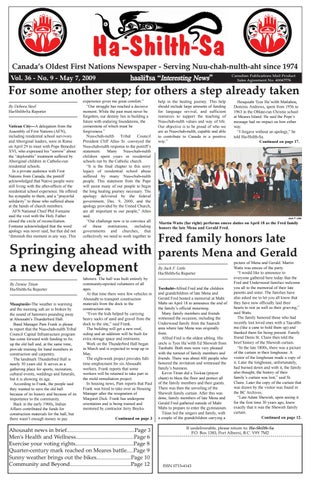 For some another step; for others a step already taken By Debora Steel Ha-Shilth-Sa Reporter Vatican City—A delegation from the Assembly of First Nations (AFN), including residential school survivors and Aboriginal leaders, were in Rome on April 29 to meet with Pope Benedict XVI, who expressed his “sorrow” about the “deplorable” treatment suffered by Aboriginal children in Catholic-run residential schools. In a private audience with First Nations from Canada, the pontiff acknowledged that Native people were still living with the after-affects of the residential school experience. He offered his sympathy to them, and a “prayerful solidarity” to those who suffered abuse at the hands of church members. AFN National Chief Phil Fontaine said the visit with the Holy Father closed the circle of reconciliation. Fontaine acknowledged that the word apology was never said, but that did not “diminish this moment in any way. This

experience gives me great comfort.” “Our struggle has reached a decisive moment. While the past must never be forgotten, our destiny lies in building a future with enduring foundations, the cornerstone of which must be forgiveness.” Nuu-chah-nulth Tribal Council President Cliff Atleo Sr. conveyed the Nuu-chah-nulth response to the pontiff’s statement. Many Nuu-chah-nulth children spent years in residential schools run by the Catholic church. “It is the final chapter to this sorry legacy of residential school abuse suffered by many Nuu-chah-nulth people. This statement from the Pope will assist many of our people to begin the long healing journey necessary. The apology delivered by the federal government, Dec. 9, 2000, and the apology provided by the United Church, are all important to our people,” Atleo said. “Our challenge now is to convince all of these institutions, including governments and churches, that collectively we need to work together to

help in the healing journey. This help should include large amounts of funding for language revival, and sufficient resources to support the teaching of Nuu-chah-nulth values and way of life. Our objective is to be proud of who we are as Nuu-chah-nulth, capable and able to contribute to Canada in a positive way.”

Hesquiaht Tyee Ha’wilth Matlahoa, Dominic Andrews, spent from 1956 to 1963 in the Oblate-run Christie school at Meares Island. He said the Pope’s message had no impact on him either way. “I forgave without an apology,” he told Ha-Shilth-Sa. Continued on page 17.

a new development By Denise Titian Ha-Shilth-Sa Reporter Maaqtusiis–The weather is warming and the morning salt air is broken by the sound of hammers pounding away at Ahousaht’s Thunderbird Hall. Band Manager Pam Frank is please to report that the Nuu-chah-nulth Tribal Council Capital Infrastructure program has come forward with funding to fix up the old hall and, at the same time, provide training for band members in construction and carpentry. The landmark Thunderbird Hall is nearly 50 years old. It serves as a gathering place for sports, recreation, cultural events, weddings and funerals, but it is showing its age. According to Frank, the people said they wanted to save the old hall because of its history and because of its importance to the community. Back in the early 1960s, Indian Affairs contributed the funds for construction materials for the hall, but there wasn’t enough money to pay

laborers. The hall was built entirely by community-spirited volunteers of all ages. At that time there were few vehicles in Ahousaht to transport construction materials from the dock to the construction site. “Even the kids helped by carrying heavy sacks of sand and gravel from the dock to the site,” said Frank. The building will get a new roof, siding and an addition will be built for extra storage space and restrooms. Work on the Thunderbird Hall began in March and is expected to wrap up in May. The eight-week project provides fulltime employment for six Ahousaht workers. Frank reports that some workers will be retained to take part in the mold remediation project. In housing news, Pam reports that Paul Frank was hired to take over as Housing Manager after the resignation of Margaret Dick. Frank has undergone orientation and is being trained and mentored by contractor Jerry Boyko. Continued on page 3

By Jack F. Little Ha-Shilth-Sa Reporter Tseshaht–Alfred Fred and the children and grandchildren of late Mena and Gerald Fred hosted a memorial at Maht Mahs on April 18 to announce the end of the family’s official mourning. Many family members and friends witnessed the occasion, including the Underwood family from the Saanich area where late Mena was originally from. Alfred Fred is the oldest sibling. His uncle is Tyee Ha’wilth Ed Shewish from Tseshaht. Both men were very pleased with the turnout of family members and friends. There was about 400 people who honored the invitation and witnessed the family’s business. Kevin Titian did a Tsi-kaa (prayer chant) to bless the floor and protect all of the family members and their guests. There was then the unveiling of the Shewish family curtain. After this was done, family members of late Mena and Gerald Fred gathered outside of Maht Mahs to prepare to enter the gymnasium. Titian led the singers and family, with a couple of the grandchildren carrying a

picture of Mena and Gerald. Martin Watts was emcee of the party. “I would like to announce to everyone gathered here today that the Fred and Underwood families welcome you all to the memorial of their late parents and sister. The families have also asked me to let you all know that they have now officially laid their hearts to rest as well as their grieving,” said Watts. The family honored those who had recently lost loved ones with a Taa-ulthma (like a cane to hold them up) and thanked them for being present. Family friend Denis St. Claire then told the brief history of the Shewish curtain. “In the late 1800s, there was a picture of the curtain in their longhouse. A visitor of the longhouse made a copy of it. Later the longhouse, unfortunately, had burned down and with it, the family also thought, the history of their family’s curtain was lost,” said St. Claire. Later the copy of the curtain that was drawn by the visitor was found in the BC Archives. “Late Adam Shewish, upon seeing it for the first time 30 years ago, knew exactly that it was the Shewish family curtain. Continued on page 12.