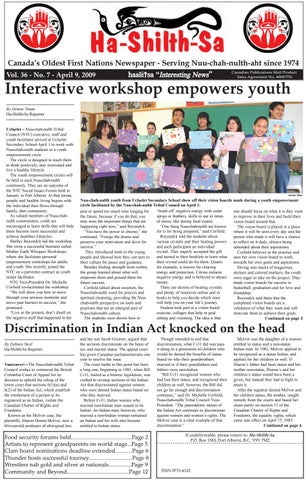 Interactive workshop empowers youth By Denise Titian Ha-Shilth-Sa Reporter Ucluelet – Nuu-chah-nulth Tribal Council (NTC) executive, staff and youth facilitator arrived at Ucluelet Secondary School April 1 to work with Nuu-chah-nulth students in a youth empowerment circle. The circle is designed to teach them to think positively, stay motivated and live a healthy lifestyle. The youth empowerment circles will be held in each Nuu-chah-nulth community. They are an outcome of the NTC Social Issues Forum held in January in Port Alberni. At that forum, people said healthy living begins with the individual then flows through family, then community. As valued members of Nuu-chahnulth communities, youth are encouraged to learn skills that will help them become more successful and achieve healthier lifestyles. Shelley Royendyk led the workshop. She owns a successful business called Mother Earth Whispers Workshops where she facilitates personal empowerment workshops for adults and youth. She recently joined the NTC on a part-time contract as youth issues facilitator. NTC Vice-President Dr. Michelle Corfield co-facilitated the workshop. “We will show you how to move through your anxious moments and move past barriers to success,” she promised. “Live in the present, don’t dwell on the negative stuff that happened in the

Nuu-chah-nulth youth from Ucluelet Secondary School show off their vision boards made during a youth empowerment circle facilitated by the Nuu-chah-nulth Tribal Council on April 1. ‘brush off’ negative energy with cedar past or spend too much time longing for one should focus on what it is they want sprigs or feathers, skills to use in times the future, because if you do that, you to improve in their lives and build their of stress, like during final exams. may miss the important things that are vision board around that. “One thing Nuu-chah-nulth are known happening right now,” said Royendyk. The vision board is placed in a place for is for being prepared,” said Corfield. “You have the power to choose,” she where it will be seen every day and the Royendyk told the students about continued. “Forego the drama and person who made it will have a chance various crystals and their healing powers preserve your motivation and drive for to reflect on it daily, always being and each participant an individual success.” reminded about their aspirations. crystal. They eagerly accepted the gift They introduced tools to the young Corfield believes in the practice and and turned to their booklets to learn what uses her own vision board to work people and showed how they can turn to their crystal could do for them. Quartz their culture for peace and guidance. towards her own goals and aspirations. for example, is known for clearing Besides finding strength from within, Diving into stacks of magazines, energy and protection. Citrine reduces the group learned about what will stickers and colored markers, the youth negative energy and is believed to attract empower them and ground them for were eager to take on the project. They money. future success. made vision boards for success in There are dozens of healing crystals Corfield talked about oosimch, the basketball, graduation and for love and and plenty of resources online and in Nuu-chah-nulth word for prayers and friendship. books to help you decide which ones spiritual cleansing, providing the NuuRoyendyk told them that the will help you on your life’s journey. chah-nulth perspective on tools and completed vision boards are a Student took part in a vision board practises that are an intergral part of validation of what they want and will exercise, collages that help in goal Nuu-chah-nulth culture. motivate them to achieve their goals. setting and visioning. The idea is that The students were shown how to Continued on page 3

Discrimination in Indian Act knocked on the head By Debora Steel Ha-Shilth-Sa Reporter Vancouver—The Nuu-chah-nulth Tribal Council wishes to commend the British Columbia Court of Appeal for its decision to uphold the ruling of the lower court that sections 6(1)(a) and 6(2) of the Indian Act, which establish the entitlement of a person to be registered as an Indian, violate the Canadian Charter of Rights and Freedoms. Known as the McIvor case, the plaintiffs, Sharon Donna McIvor, now a 60-year-old professor of aboriginal law,

and her son Jacob Grismer, argued that the sections discriminate on the basis of sex and marital status. The appeal court has given Canadian parliamentarians one year to resolve the issue. The court battle to this point has been a long one, beginning in 1985, when Bill C-31, hailed as a historic legislation, was crafted to revamp sections of the Indian Act that discriminated against women who were denied Indian status based on who they married. Before C-31, Indian women who married non-Indian men ceased to be Indian. An Indian man, however, who married a non-Indian woman remained an Indian and his wife also became entitled to Indian status.

Though intended to end that discrimination, what C-31 did was pass it along to a generation of children who would be denied the benefits of status based on who their grandmothers married or if their grandfathers and fathers were non-Indian. “Bill C-31 recognized women who had lost their status, and recognized their children as well, however, the Bill did not go far enough and discrimination continues,” said Dr. Michelle Corfield, Nuu-chah-nulth Tribal Council VicePresident. “The paternalistic nature of the Indian Act continues to discriminate against women and women’s rights. The McIvor case is a clear example of that discrimination.”

McIvor was the daughter of a woman entitled to status and a non-status Indian man. In 1985, McIvor applied to be recognized as a status Indian, and applied for her children as well. If Sharon’s father had been status and her mother non-status, Sharon’s and her children’s status would have been a given, but instead they had to fight to attain it. After the registrar denied McIvor and her children status, the mother, sought remedy from the courts and based her claim partly on section 15 of the Canadian Charter of Rights and Freedoms, the equality rights, which came into effect on April 17, 1985. Continued on page 4.