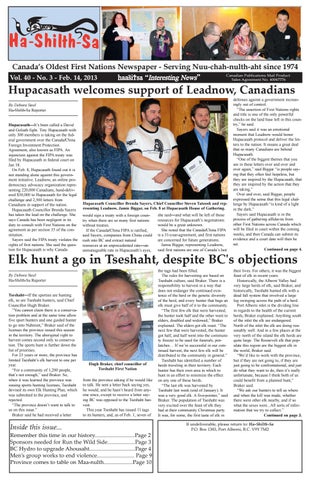 Hupacasath welcomes support of Leadnow, Canadians By Debora Steel Ha-Shilth-Sa Reporter Hupacasath—It’s been called a David and Goliath fight. Tiny Hupacasath with only 300 members is taking on the federal government over the Canada/China Foreign Investment Protection Agreement, also known as FIPA. An injunction against the FIPA treaty was filed by Hupacasath in federal court on Jan 18. On Feb. 8, Hupacasath found out it is not standing alone against this government initiative. Leadnow, an online prodemocracy advocacy organization representing 220,000 Canadians, hand-delivered $30,000 to Hupacasath for the legal challenge and 2,500 letters from Canadians in support of the nation. Hupacasath Councillor Brenda Sayers has taken the lead on the challenge. She says Canada has been negligent in its duty to consult with First Nations on the agreement as per section 35 of the constitution. Sayers said the FIPA treaty violates the rights of first nations. She said the question for Hupacasath is why Canada

Hupacasath Councillor Brenda Sayers, Chief Councillor Steven Tatoosh and representing Leadnow, Jamie Biggar, on Feb. 8 at Hupacasath House of Gathering. would sign a treaty with a foreign country when there are so many first nations without treaties. If the Canada/China FIPA is ratified, said Sayers, companies from China could rush into BC and extract natural resources at an unprecedented rate—an unmanageable rate in Hupacasath’s eyes,

she said—and what will be left of those resources for Hupacasath’s negotiations would be a great unknown. She noted that the Canada/China FIPA is a 31-year-agreement, and first nations are concerned for future generations. Jamie Biggar, representing Leadnow, said first nations are one of Canada’s last

defenses against a government increasingly out of control. “The assertion of First Nations rights and title is one of the only powerful checks on the land base left in this country,” he said. Sayers said it was an emotional moment that Leadnow would honor Hupacasath protocol and deliver the letters to the nation. It means a great deal that so many Canadians are behind Hupacasath. “One of the biggest themes that you see in these letters over and over and over again,” said Biggar “is people saying that they often feel hopeless, but they are inspired by the Hupacasath, that they are inspired by the action that they are taking.” Over and over, said Biggar, people expressed the sense that this legal challenge by Hupacasath “is kind of a light in the dark.” Sayers said Hupacasath is in the process of gathering affidavits from other First Nations across Canada which will be filed in court within the coming weeks, and then Canada can submit its evidence and a court date will then be set. Continued on page 4.

Elk hunt a go in Tseshaht, despite BC&#39;s objections By Debora Steel Ha-Shilth-Sa Reporter Tseshaht—If the sporties are hunting elk, so are Tseshaht hunters, said Chief Councillor Hugh Braker. “You cannot claim there is a conservation problem and at the same time allow five sport hunters and one guided hunter to go into Nahmint,” Braker said of the licenses the province issued this season in the territory. The aboriginal right to harvest comes second only to conservation. The sports hunt is further down the list of priorities. For 25 years or more, the province has limited Tseshaht’s elk harvest to one per year. “For a community of 1,200 people, that’s not enough,” said Braker. So, when it was learned the province was issuing sports hunting licenses, Tseshaht devised its own Elk Hunting Plan, which was submitted to the province, and rejected. “The province doesn’t want to talk to us on this issue.” Braker said he had received a letter

Hugh Braker, chief councillor of Tseshaht First Nation from the province asking if he would like to talk. He sent a letter back saying yes, he would, and he hasn’t heard from anyone since, except to receive a letter saying BC was opposed to the Tseshaht harvest. This year Tseshaht has issued 11 tags to its hunters, and, as of Feb. 1, seven of

the tags had been filled. The rules for harvesting are based on Tseshaht culture, said Braker. There is a responsibility to harvest in a way that does not endanger the continued existence of the herd or the genetic diversity of the herd, and every hunter that bags an elk must give half of it to the community. “The first few elk that were harvested, the hunter took half and the other went to elders, disabled and widowed,” Braker explained. The elders got elk roast. “The next few that were harvested, the hunter got half, and half went into the community freezer to be used for funerals, potlatches… If we’re successful in our continued harvest, the next few elk will be distributed to the community in general.” Tseshaht has identified a number of herds traveling in their territory. Each hunter has their own area in which to hunt in an effort to minimize the effect on any one of those herds. “The last elk was harvested by Tseshaht last week (end of January). It was a very good elk. A five-pointer,” said Braker. The population of Tseshaht was very excited over the feast of elk they had at their community Christmas party. It was, for some, the first taste of elk in

their lives. For others, it was the biggest feast of elk in recent years. Historically, the Alberni Valley had very large herds of elk, said Braker, and historically, Tseshaht hunted elk with a dead fall system that involved a large log swinging across the path of a herd. Port Alberni inlet is the dividing line in regards to the health of the current herds, Braker explained. Anything south of the inlet the elk are endangered. North of the inlet the elk are doing reasonably well. And in a few places at the very north of the island the elk herds are quite large. The Roosevelt elk that populate this region are the biggest elk in the world, Braker said. “We’d like to work with the province, but if they are not going to, if they are just going to be confrontational, and just do what they want to do, then it’s really unfortunate, because I think both of us could benefit from a planned hunt,” Braker said. “We ask our hunters to tell us where and when the kill was made, whether there were other elk nearby, and if so what the sexes were...All sorts of information that we try to collect.” Continued on page 3.