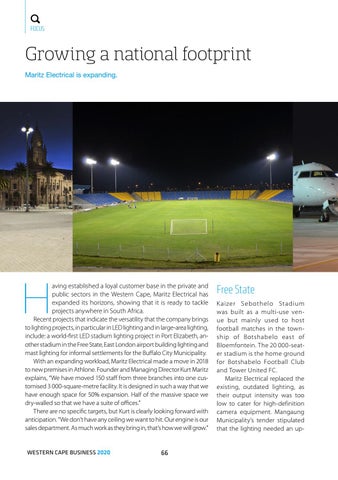 aving established a loyal customer base in the private and public sectors in the Western Cape, Maritz Electrical has expanded its horizons, showing that it is ready to tackle projects anywhere in South Africa. Recent projects that indicate the versatility that the company brings to lighting projects, in particular in LED lighting and in large-area lighting, include: a world-first LED stadium lighting project in Port Elizabeth, another stadium in the Free State, East London airport building lighting and mast lighting for informal settlements for the Buffalo City Municipality. With an expanding workload, Maritz Electrical made a move in 2018 to new premises in Athlone. Founder and Managing Director Kurt Maritz explains, “We have moved 150 staff from three branches into one customised 3 000-square-metre facility. It is designed in such a way that we have enough space for 50% expansion. Half of the massive space we dry-walled so that we have a suite of offices.” There are no specific targets, but Kurt is clearly looking forward with anticipation. “We don’t have any ceiling we want to hit. Our engine is our sales department. As much work as they bring in, that’s how we will grow.”

Free State K aizer Seb othelo Stadium was built as a multi-use venue but mainly used to host football matches in the township of Botshabelo east of Bloemfontein. The 20 000-seater stadium is the home ground for Botshabelo Football Club and Tower United FC. Maritz Electrical replaced the existing, outdated lighting, as their output intensity was too low to cater for high-definition camera equipment. Mangaung Municipality’s tender stipulated that the lighting needed an up-