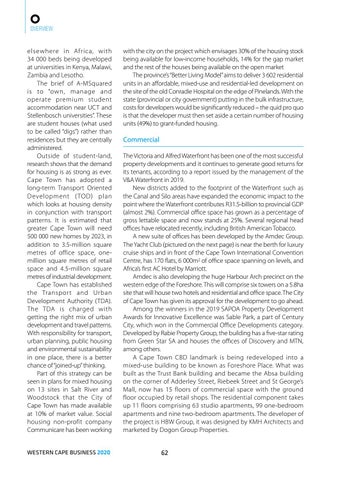 OVERVIEW elsewhere in Africa, with 34 000 beds being developed at universities in Kenya, Malawi, Zambia and Lesotho. The brief of A-MSquared is to “own, manage and operate premium student accommodation near UCT and Stellenbosch universities”. These are student houses (what used to be called “digs”) rather than residences but they are centrally administered. Outside of student-land, research shows that the demand for housing is as strong as ever. Cape Town has adopted a long-term Transport Oriented Development ( TOD) plan which looks at housing density in conjunction with transport patterns. It is estimated that greater Cape Town will need 500 000 new homes by 2023, in addition to 3.5-million square metres of office space, onemillion square metres of retail space and 4.5-million square metres of industrial development. Cape Town has established the Transpor t and Urban Development Authority (TDA). The TDA is charged with getting the right mix of urban development and travel patterns. With responsibility for transport, urban planning, public housing and environmental sustainability in one place, there is a better chance of “joined-up” thinking. Part of this strategy can be seen in plans for mixed housing on 13 sites in Salt River and Woodstock that the City of Cape Town has made available at 10% of market value. Social housing non-profit company Communicare has been working WESTERN CAPE BUSINESS 2020

with the city on the project which envisages 30% of the housing stock being available for low-income households, 14% for the gap market and the rest of the houses being available on the open market The province’s “Better Living Model” aims to deliver 3 602 residential units in an affordable, mixed-use and residential-led development on the site of the old Conradie Hospital on the edge of Pinelands. With the state (provincial or city government) putting in the bulk infrastructure, costs for developers would be significantly reduced – the quid pro quo is that the developer must then set aside a certain number of housing units (49%) to grant-funded housing.

Commercial The Victoria and Alfred Waterfront has been one of the most successful property developments and it continues to generate good returns for its tenants, according to a report issued by the management of the V&A Waterfront in 2019. New districts added to the footprint of the Waterfront such as the Canal and Silo areas have expanded the economic impact to the point where the Waterfront contributes R31.5-billion to provincial GDP (almost 2%). Commercial office space has grown as a percentage of gross lettable space and now stands at 25%. Several regional head offices have relocated recently, including British American Tobacco. A new suite of offices has been developed by the Amdec Group. The Yacht Club (pictured on the next page) is near the berth for luxury cruise ships and in front of the Cape Town International Convention Centre, has 170 flats, 6 000m2 of office space spanning on levels, and Africa’s first AC Hotel by Marriott. Amdec is also developing the huge Harbour Arch precinct on the western edge of the Foreshore. This will comprise six towers on a 5.8ha site that will house two hotels and residential and office space. The City of Cape Town has given its approval for the development to go ahead. Among the winners in the 2019 SAPOA Property Development Awards for Innovative Excellence was Sable Park, a part of Century City, which won in the Commercial Office Developments category. Developed by Rabie Property Group, the building has a five-star rating from Green Star SA and houses the offices of Discovery and MTN, among others. A Cape Town CBD landmark is being redeveloped into a mixed-use building to be known as Foreshore Place. What was built as the Trust Bank building and became the Absa building on the corner of Adderley Street, Riebeek Street and St George’s Mall, now has 15 floors of commercial space with the ground floor occupied by retail shops. The residential component takes up 11 floors comprising 63 studio apartments, 99 one-bedroom apartments and nine two-bedroom apartments. The developer of the project is HBW Group, it was designed by KMH Architects and marketed by Dogon Group Properties.