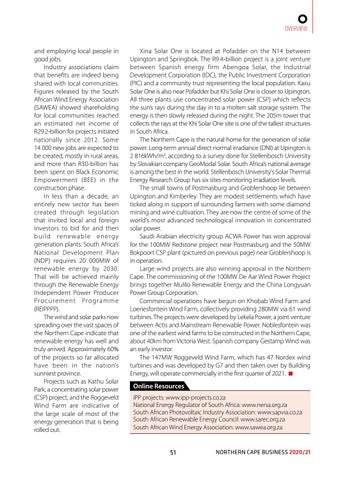 OVERVIEW and employing local people in good jobs. Industry associations claim that benefits are indeed being shared with local communities. Figures released by the South African Wind Energy Association (SAWEA) showed shareholding for local communities reached an estimated net income of R29.2-billion for projects initiated nationally since 2012. Some 14 000 new jobs are expected to be created, mostly in rural areas, and more than R30-billion has been spent on Black Economic Empowerment (BEE) in the construction phase. In less than a decade, an entirely new sector has been created through legislation that invited local and foreign investors to bid for and then b u i l d re n e w a b l e e n e rg y generation plants. South Africa’s National Development Plan (NDP) requires 20 000MW of renewable energy by 2030. That will be achieved mainly through the Renewable Energy Independent Power Producer Pro c u re m e n t Pro gr a m m e (REIPPPP). The wind and solar parks now spreading over the vast spaces of the Northern Cape indicate that renewable energy has well and truly arrived. Approximately 60% of the projects so far allocated have been in the nation’s sunniest province. Projects such as Kathu Solar Park, a concentrating solar power (CSP) project, and the Roggeveld Wind Farm are indicative of the large scale of most of the energy generation that is being rolled out.

Xina Solar One is located at Pofadder on the N14 between Upington and Springbok. The R9.4-billion project is a joint venture between Spanish energy firm Abengoa Solar, the Industrial Development Corporation (IDC), the Public Investment Corporation (PIC) and a community trust representing the local population. Kaxu Solar One is also near Pofadder but Khi Solar One is closer to Upington. All three plants use concentrated solar power (CSP) which reflects the sun’s rays during the day in to a molten salt storage system. The energy is then slowly released during the night. The 205m tower that collects the rays at the Khi Solar One site is one of the tallest structures in South Africa. The Northern Cape is the natural home for the generation of solar power. Long-term annual direct normal irradiance (DNI) at Upington is 2 816kWh/m2, according to a survey done for Stellenbosch University by Slovakian company GeoModal Solar. South Africa’s national average is among the best in the world. Stellenbosch University’s Solar Thermal Energy Research Group has six sites monitoring irradiation levels. The small towns of Postmasburg and Groblershoop lie between Upington and Kimberley. They are modest settlements which have ticked along in support of surrounding farmers with some diamond mining and wine cultivation. They are now the centre of some of the world’s most advanced technological innovation in concentrated solar power. Saudi Arabian electricity group ACWA Power has won approval for the 100MW Redstone project near Postmasburg and the 50MW Bokpoort CSP plant (pictured on previous page) near Groblershoop is in operation. Large wind projects are also winning approval in the Northern Cape. The commissioning of the 100MW De Aar Wind Power Project brings together Mulilo Renewable Energy and the China Longyuan Power Group Corporation. Commercial operations have begun on Khobab Wind Farm and Loeriesfontein Wind Farm, collectively providing 280MW via 61 wind turbines. The projects were developed by Lekela Power, a joint venture between Actis and Mainstream Renewable Power. Noblesfontein was one of the earliest wind farms to be constructed in the Northern Cape, about 40km from Victoria West. Spanish company Gestamp Wind was an early investor. The 147MW Roggeveld Wind Farm, which has 47 Nordex wind turbines and was developed by G7 and then taken over by Building Energy, will operate commercially in the first quarter of 2021. ■