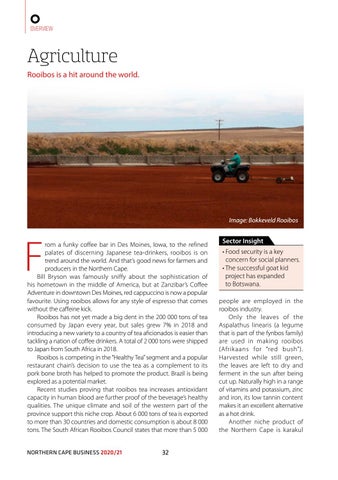 Agriculture Rooibos is a hit around the world.

rom a funky coffee bar in Des Moines, Iowa, to the refined palates of discerning Japanese tea-drinkers, rooibos is on trend around the world. And that’s good news for farmers and producers in the Northern Cape. Bill Bryson was famously sniffy about the sophistication of his hometown in the middle of America, but at Zanzibar’s Coffee Adventure in downtown Des Moines, red cappuccino is now a popular favourite. Using rooibos allows for any style of espresso that comes without the caffeine kick. Rooibos has not yet made a big dent in the 200 000 tons of tea consumed by Japan every year, but sales grew 7% in 2018 and introducing a new variety to a country of tea aficionados is easier than tackling a nation of coffee drinkers. A total of 2 000 tons were shipped to Japan from South Africa in 2018. Rooibos is competing in the “Healthy Tea” segment and a popular restaurant chain’s decision to use the tea as a complement to its pork bone broth has helped to promote the product. Brazil is being explored as a potential market. Recent studies proving that rooibos tea increases antioxidant capacity in human blood are further proof of the beverage’s healthy qualities. The unique climate and soil of the western part of the province support this niche crop. About 6 000 tons of tea is exported to more than 30 countries and domestic consumption is about 8 000 tons. The South African Rooibos Council states that more than 5 000

Sector Insight • Food security is a key concern for social planners. • The successful goat kid project has expanded to Botswana. people are employed in the rooibos industry. Only the leaves of the Aspalathus linearis (a legume that is part of the fynbos family) are used in making rooibos (Afrikaans for “red bush”). Harvested while still green, the leaves are left to dry and ferment in the sun after being cut up. Naturally high in a range of vitamins and potassium, zinc and iron, its low tannin content makes it an excellent alternative as a hot drink. Another niche product of the Northern Cape is karakul