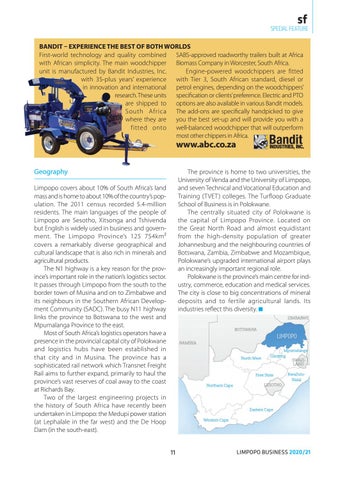 BANDIT – EXPERIENCE THE BEST OF BOTH WORLDS Polokwane has good hotel and conferencing faciliThohoyandou is the administrative centre of First-world technology and quality combined SABS-approved roadworthy trailers built at Africa ties. Park Inn by Radisson Polokwane is the newest Thulamela Local Municipality, Vhembe District with African simplicity. The main woodchipper Biomass Company in Worcester, South Africa. hotel to open in the city. Nearby Moria attracts up to Municipality and the University of Venda. The Ivory unit is manufactured by Bandit Industries, Inc. Engine-powered woodchippers are fitted a million people every year, when the Zion Christian Route passes through the district. Other attractions with 35-plus years’ experience with Tier 3, South African standard, diesel or Church celebrates Easter. include an ancient baobab tree, the Dzata Ruins, the in innovation and international petrol engines, depending on the woodchippers’ Museum of the Drum,preference. the mystical Lakeand Fundudzi research. These units specification or clients’ Electric PTO Sekhukhune District and Nwanedi Park. are shipped to options are alsoProvincial available in various Bandit models. Government is the largest employer in this southern South Africa The add-ons are specifically handpicked to give Waterberg District district, followed by agriculture and hunting. The vast where they are you the best set-up and will provide you with a The mining sector is the largest contributor to regionmajority of households are rural (94%) and Groblersdal fitted onto well-balanced woodchipper that will outperform al GDP, while agriculture is also significant. Several is the district capital. The region’s fertile lands produce most other chippers in Africa. towns in the district are in the mineral-rich Bushveld maize, tobacco, peanuts, vegetables, sunflower seeds www.abc.co.za Igneous Complex. and cotton on a large scale. Agriculture makes up 25% The district also features the riches of the of the economy. Burgersfort is an important town Waterberg Coal Fields, iron ore (at Thabazimbi) and because of platinum mining. Geography The province is home to two universities, the tin and platinum at Mookgophong. The town of University of Venda and the University of Limpopo, Mopani District Lephalale is at the heart of the region’s coal-mining Limpopo covers about 10% of South Africa’s land and seven Technical and Vocational Education and and power-generation sectors and is the site of Giyani is the administrative capital of the district and is mass and is home to about 10% of the country’s popTraining (TVET) colleges. The Turfloop Graduate Eskom’s huge new Medupi power plant which is key to the local economy. The public sector is one of ulation. The 2011 census recorded 5.4-million School of Business is in Polokwane. under construction. the largest employers the key sectors agriculresidents. The mainand languages of theare people of The centrally situated city of Polokwane is area around Mokopane is oneLocated of the richture and mining. hasXitsonga an established food manLimpopo are Mopani Sesotho, and Tshivenda theThe capital of Limpopo Province. on est zones South Africa,equidistant producing ufacturing industry, in canned, preservedand andgoverndriedbut English is widely used in business theagricultural Great North Roadin and almost fruit production and vegetable juices.125 Phalaborwa wheat, tobacco, cotton, beef, maize and ment. The Limpopo Province’s 754km² from the high-density population of peanuts. greater is covers the gateway to the Kruger National Park. It has The bubbling hot springs of Warmbaths (Bela-Bela) a remarkably diverse geographical anda Johannesburg and the neighbouring countries of good airport and is a that tourism hub. Palaborwa Mining isBotswana, a popular Zambia, tourism destination, district has cultural landscape is also rich in minerals and Zimbabwe and the Mozambique, Company (PMC) is the major economic driving force many luxury golf estates.international The Legendairport Golf & plays Safari agricultural products. Polokwane’s upgraded highway is phosphate a key reason the provan increasingly important of regional in theThe area.N1 State-owned andfor phosphoric Resort has the distinction havingrole. had each of its ince’s important roleisin the nation’s sector. holes Polokwane is the centre for indacid producer Foskor another majorlogistics employer. The 18 designed byprovince’s a differentmain famous golfer, and It passes through Limpopo from the south to the ustry, commerce, and medical Marula Festival is held in Phalaborwa every year. an extra hole whicheducation is very long (360m) but services. also very border town ofclimate Musinaand andfertile on tosoils Zimbabwe The city is closea helicopter to big concentrations A subtropical combineand to high: it requires ride to get to of themineral tee-off its neighbours in thevery Southern AfricaninDevelopdeposits to mountainside. fertile agricultural lands. Its make greater Tzaneen productive terms of point 400mand up the ment The second busy N11 highway industries reflect this diversity. ■ fruit andCommunity vegetables.(SADC). Limpopo’s most poplinkscity the has province to Botswana theThe west and ulous a population of 80 to 000. Letaba Mpumalanga to the east.of South Africa’s Valley producesProvince a large proportion Mostavocadoes of South Africa’s logistics operators have a mangoes, and tomatoes. Forty sawmills presence in the provincial capital city of Polokwane operate in the area, drawing on the heavily forested and logistics hubs have been established in hills around the city. that city and in Musina. The province has a sophisticated rail network which Transnet Freight Vhembe District Rail aims to further expand, primarily to haul the The Vhembe Zimbabwe and province’s vastDistrict reservesborders of coal away to the coast Botswana. at RichardsThe Bay.district’s administrative capital is Thohoyandou. Vhembe’s vast bushveldprojects supports Two of the largest engineering in commercial and the districtbeen has the historyand of game Southfarming Africa have recently considerable and historical assets. Gamestation farmundertakencultural in Limpopo: the Medupi power ing growing subsector, is eco-tourism. De Beers’ (atis aLephalale in the faraswest) and the De Hoop Venetia Mine, just west of Musina, is South Dam (in the situated south-east). Africa’s largest diamond producer. LIMPOPO BUSINESS 2018/19