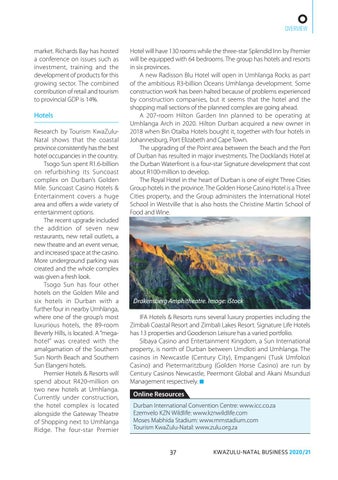 OVERVIEW market. Richards Bay has hosted a conference on issues such as investment, training and the development of products for this growing sector. The combined contribution of retail and tourism to provincial GDP is 14%.

Hotels Research by Tourism KwaZuluNatal shows that the coastal province consistently has the best hotel occupancies in the country. Tsogo Sun spent R1.6-billion on refurbishing its Suncoast complex on Durban’s Golden Mile. Suncoast Casino Hotels & Entertainment covers a huge area and offers a wide variety of entertainment options. The recent upgrade included the addition of seven new restaurants, new retail outlets, a new theatre and an event venue, and increased space at the casino. More underground parking was created and the whole complex was given a fresh look. Tsogo Sun has four other hotels on the Golden Mile and six hotels in Durban with a further four in nearby Umhlanga, where one of the group’s most luxurious hotels, the 89-room Beverly Hills, is located. A “megahotel” was created with the amalgamation of the Southern Sun North Beach and Southern Sun Elangeni hotels. Premier Hotels & Resorts will spend about R420-million on two new hotels at Umhlanga. Currently under construction, the hotel complex is located alongside the Gateway Theatre of Shopping next to Umhlanga Ridge. The four-star Premier

Hotel will have 130 rooms while the three-star Splendid Inn by Premier will be equipped with 64 bedrooms. The group has hotels and resorts in six provinces. A new Radisson Blu Hotel will open in Umhlanga Rocks as part of the ambitious R3-billion Oceans Umhlanga development. Some construction work has been halted because of problems experienced by construction companies, but it seems that the hotel and the shopping mall sections of the planned complex are going ahead. A 207-room Hilton Garden Inn planned to be operating at Umhlanga Arch in 2020. Hilton Durban acquired a new owner in 2018 when Bin Otaiba Hotels bought it, together with four hotels in Johannesburg, Port Elizabeth and Cape Town. The upgrading of the Point area between the beach and the Port of Durban has resulted in major investments. The Docklands Hotel at the Durban Waterfront is a four-star Signature development that cost about R100-million to develop. The Royal Hotel in the heart of Durban is one of eight Three Cities Group hotels in the province. The Golden Horse Casino Hotel is a Three Cities property, and the Group administers the International Hotel School in Westville that is also hosts the Christine Martin School of Food and Wine.