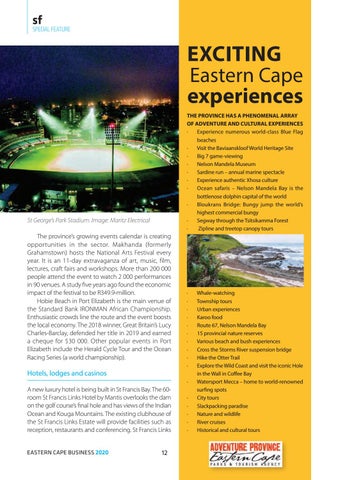 St George’s Park Stadium. Image: Maritz Electrical The province’s growing events calendar is creating opportunities in the sector. Makhanda (formerly Grahamstown) hosts the National Arts Festival every year. It is an 11-day extravaganza of art, music, film, lectures, craft fairs and workshops. More than 200 000 people attend the event to watch 2 000 performances in 90 venues. A study five years ago found the economic impact of the festival to be R349.9-million. Hobie Beach in Port Elizabeth is the main venue of the Standard Bank IRONMAN African Championship. Enthusiastic crowds line the route and the event boosts the local economy. The 2018 winner, Great Britain’s Lucy Charles-Barclay, defended her title in 2019 and earned a cheque for $30 000. Other popular events in Port Elizabeth include the Herald Cycle Tour and the Ocean Racing Series (a world championship).

A new luxury hotel is being built in St Francis Bay. The 60room St Francis Links Hotel by Mantis overlooks the dam on the golf course’s final hole and has views of the Indian Ocean and Kouga Mountains. The existing clubhouse of the St Francis Links Estate will provide facilities such as reception, restaurants and conferencing. St Francis Links EASTERN CAPE BUSINESS 2020