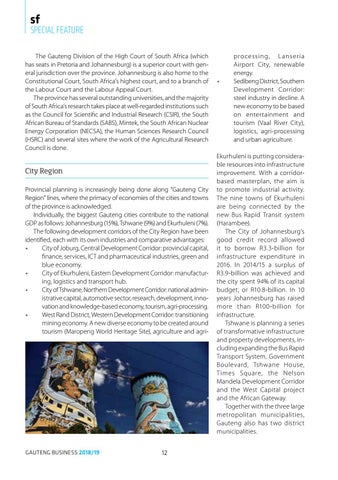 SPECIAL FEATURE The Gauteng Division of the High Court of South Africa (which has seats in Pretoria and Johannesburg) is a superior court with general jurisdiction over the province. Johannesburg is also home to the Constitutional Court, South Africa’s highest court, and to a branch of the Labour Court and the Labour Appeal Court. The province has several outstanding universities, and the majority of South Africa’s research takes place at well-regarded institutions such as the Council for Scientific and Industrial Research (CSIR), the South African Bureau of Standards (SABS), Mintek, the South African Nuclear Energy Corporation (NECSA), the Human Sciences Research Council (HSRC) and several sites where the work of the Agricultural Research Council is done.

Ekurhuleni is putting considerable resources into infrastructure improvement. With a corridorbased masterplan, the aim is to promote industrial activity. The nine towns of Ekurhuleni are being connected by the new Bus Rapid Transit system (Harambee). The City of Johannesburg’s good credit record allowed it to borrow R3.3-billion for infrastructure expenditure in 2016. In 2014/15 a surplus of R3.9-billion was achieved and the city spent 94% of its capital budget, or R10.8-billion. In 10 years Johannesburg has raised more than R100-billion for infrastructure. Tshwane is planning a series of transformative infrastructure and property developments, including expanding the Bus Rapid Transport System, Government Boulevard, Tshwane House, Times Square, the Nelson Mandela Development Corridor and the West Capital project and the African Gateway. Together with the three large metropolitan municipalities, Gauteng also has two district municipalities.