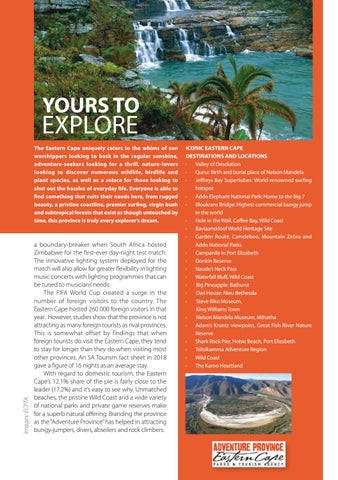 The Eastern Cape uniquely caters to the whims of sun worshippers looking to bask in the regular sunshine, adventure-seekers looking for a thrill, nature-lovers looking to discover numerous wildlife, birdlife and plant species, as well as a solace for those looking to shut out the hassles of everyday life. Everyone is able to find something that suits their needs here, from rugged beauty, a pristine coastline, premier surfing, virgin bush and subtropical forests that exist as though untouched by time, this province is truly every explorer’s dream.

a boundary-breaker when South Africa hosted Zimbabwe for the first-ever day-night test match. The innovative lighting system deployed for the match will also allow for greater flexibility in lighting music concerts with lighting programmes that can be tuned to musicians’ needs. The FIFA World Cup created a surge in the number of foreign visitors to the country. The Eastern Cape hosted 260 000 foreign visitors in that year. However, studies show that the province is not attracting as many foreign tourists as rival provinces. This is somewhat offset by findings that when foreign tourists do visit the Eastern Cape, they tend to stay for longer than they do when visiting most other provinces. An SA Tourism fact sheet in 2018 gave a figure of 16 nights as an average stay. With regard to domestic tourism, the Eastern Cape’s 12.1% share of the pie is fairly close to the leader (17.2%) and it’s easy to see why. Unmatched beaches, the pristine Wild Coast and a wide variety of national parks and private game reserves make for a superb natural offering. Branding the province as the “Adventure Province” has helped in attracting bungy-jumpers, divers, abseilers and rock climbers.