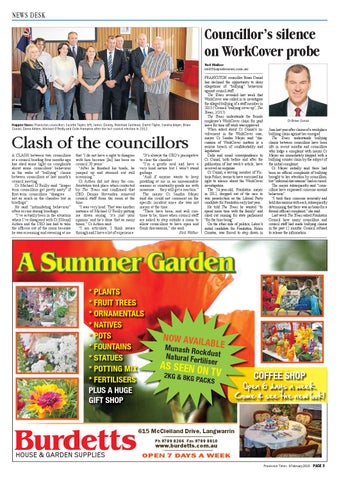 FRANKSTON councillor Brian Cunial has declined the opportunity to deny allegations of “bullying” behaviour against council staff. The Times revealed last week that WorkCover was called in to investigate the alleged bullying of a staff member in 2013 (‘Council ‘bullying cover up”, The Times, 2/2/15). The Times understands the female employee’s WorkCover claim for paid leave for time off work was approved. When asked about Cr Cunial’s involvement in the WorkCover case, mayor Cr Sandra Mayer said “discussion of WorkCover matters is a serious breach of confidentiality and legislation”. Calls and email correspondence to Cr Cunial, both before and after the publication of last week’s article, have received no response. Cr Cunial, a serving member of Victoria Police, seems to have exercised his right to silence about the WorkCover investigation. The 54-year-old, Frankston mayor in 2012, dropped out of the race to win preselection as the Liberal Party candidate for Frankston early last year. He told The Times he wanted “to spend more time with the family” and ruled out running for state parliament “for the time being”. On the other side of politics, Labor’s initial candidate for Frankston, Helen Constas, was forced to step down in

Clash of the councillors A CLASH between two councillors at a council briefing four months ago has shed some light on complaints about some councillors’ behaviour in the wake of “bullying” claims between councillors at last month’s council meeting. Cr Michael O’Reilly said “longer term councillors get pretty nasty” if first-term councillors “disagree … not so much in the chamber but in briefings”. He said “intimidating behaviour” often occurs during briefings. “I’ve actually been in the situation where I’ve disagreed with Cr [Glenn] Aitken and the CEO has had to take the officers out of the room because he was screaming and swearing at me

that ‘I do not have a right to disagree with him because [he] has been on council 20 years’. “After he finished his tirade, he jumped up and stormed out still screaming.” Cr Aitken did not deny the confrontation took place when contacted by The Times and confirmed that CEO Dennis Hovenden removed council staff from the room at the time. “I was very loud. That was another instance of Michael O’Reilly putting me down saying ‘it’s just your opinion’ and he’s done that so many times,” Cr Aitken said. “I am articulate, I think issues through and I have a lot of experience.

“It’s always the CEO’s prerogative to clear the chamber. “I’m a gentle soul and have a very kind nature but I won’t stand garbage. “And if anyone wants to keep prodding at me in an unreasonable manner or constantly goads me with nonsense … they will get a reaction.” The mayor Cr Sandra Mayer said she could not comment on the specific incident since she was not mayor at the time. “There have been, and will continue to be, times when council staff are asked to step outside a room to allow councillors to have open and frank discussions,” she said. Neil Walker

June last year after claims of a workplace bullying claim against her emerged. The Times understands bullying claims between councillors have been rife in recent months and councillors who lodge a complaint with mayor Cr Mayer are immediately slapped with a bullying counter claim by the subject of the initial complaint. Cr Mayer initially said there had been no official complaints of bullying brought to her attention by councillors, but “informal discussions” had occurred. The mayor subsequently said “councillors have expressed concerns around behaviour”. “I took their concerns seriously and held discussions with each, subsequently determining that there was no basis for a formal official complaint,” she said. Last week The Times asked Frankston Council how many councillors and council staff had made bullying claims in the past 12 months. Council refused to release the information.