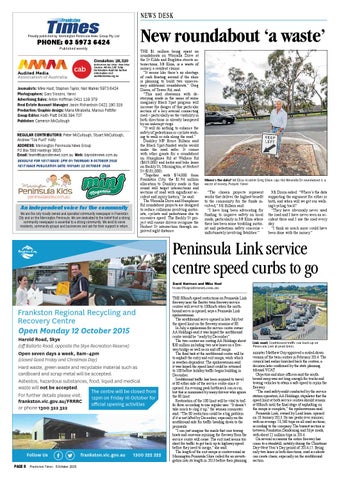 THE $1 million being spent on roundabouts on Wooralla Drive at the St Kilda and Brighton streets intersections, Mt Eliza, is a waste of money, a resident claims. “It seems like there’s no shortage of cash floating around if the shire is planning to build two unnecessary additional roundabouts,” Greg Dixon, of Tower Rd, said. “This mad obsession with destroying roads in the name of some imaginary Black Spot program will increase the danger of this particular section of a key arterial connecting road – particularly as the visibility in both directions is already hampered by an unkempt verge. “It will do nothing to enhance the safety of pedestrians or cyclists wishing to walk or ride along the road.” Dunkley MP Bruce Billson said the Black Spot-funded works would make the road safer. It comes with other grants for a roundabout on Humphries Rd at Walkers Rd ($619,000) and kerbs and bike lanes on Barkly St, Mornington, at Herbert St ($181,000). “Together with $74,000 from Frankston City, the $1.94 million allocation to Dunkley roads in this round will target intersections and sections of road with significant accident and injury history,” he said. The Wooralla Drive and Humphries Rd roundabout projects are designed to reduce collisions involving motorists, cyclists and pedestrians due to excessive speed. The Barkly St project will ensure drivers recognise the Herbert St intersection through improved sight distance.

“The chosen projects represent works that deliver the highest benefit to the community for the funds involved,” Mr Billson said. “I have long been advocating for funding to improve safety on local roads, particularly in Mt Eliza where there has been some troubling motorist and pedestrian safety concerns – unfortunately involving fatalities.”

Mr Dixon asked: “Where’s the data supporting the argument for either or both, and when will we get our walking/cycling track? “They have obviously never used the road and I have never seen an accident there and I use the road every day. “I think so much more could have been done with the money.”

Hard waste, green waste and recyclable material such as cardboard and scrap metal will be accepted. Asbestos, hazardous substances, food, liquid and medical waste will not be accepted. The centre will be closed from For further details please visit: 12pm on Friday 16 October for frankston.vic.gov.au/FRRRC official opening activities or phone 1300 322 322

THE 80km/h speed restrictions on Peninsula Link freeway near the Baxter twin freeway service centres will revert to 100km/h when the northbound servo is opened, says a Peninsula Link spokeswoman. The southbound servo opened in late July but the speed limit on the freeway remains at 80. In July, a spokesman for service centre owner AA Holdings said it was hoped the northbound centre would be “ready by December”. The two centres are costing AA Holdings about $30 million including two new lanes on a freeway bridge as well as on and off ramps. The final task at the northbound centre will be to asphalt the entry and exit ramps, work which is weather-dependent. The spokeswoman said it was hoped the speed limit could be returned to 100 before holiday traffic began building in December. Southbound traffic has been required to travel at 80 either side of the service centre since it opened. An evening peak bottleneck can occur, but this is minimised by many drivers who ignore the 80 limit. Restoration of the 100 limit will be vital to traffic flow, according to one regular user. “It doesn’t take much to clog it up,” the woman commuter said. “The 80 restriction could be a big problem if it is not lifted by December, especially on the southbound side for traffic heading down to the peninsula. “I can just imagine the snarls that cars towing boats and caravans rejoining the freeway from the service centre will cause. The exit road seems too short for traffic to get back up to highway speed before they need to merge,” she said. The length of the exit ramps is controversial as Mornington Peninsula Shire called for an investigation into its length in 2013 before then planning

Link snarl: Southbound traffic can back up on Peninsula Link at peak times.

minister Matthew Guy approved a scaled-down version of the twin centres in February 2014. The council had earlier knocked back the centres, a decision later confirmed by the state planning tribunal VCAT. Objectors and shire officers said the southbound ramp was not long enough for trucks and towing vehicles to attain a safe speed to rejoin the freeway. “The road safety audit conducted by the service station operators, AA Holdings, stipulates that the speed limit at both service centres should remain at 80km/h until the final stage of asphalting on the ramps is complete,” the spokeswoman said. Peninsula Link, owned by Lend lease, opened on 18 January 2013. Its use peaks over summer, with an average 53,560 trips on all road sections, according to the company. The busiest section is between Frankston-Dandenong and Skye roads, with about 22 million trips in 2014. On several occasions the entire freeway has come to a standstill, notably during the Christmas Day–New Year’s Day period of 2014-15. Being only two lanes in both directions, road accidents can create chaos, especially on the southbound section.