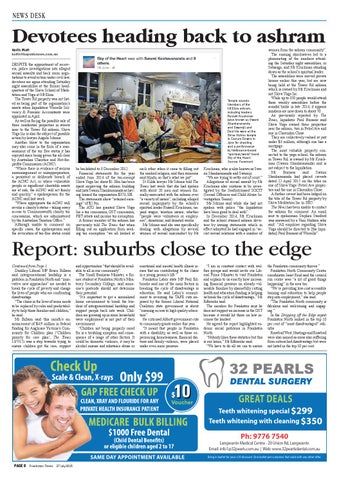 Devotees heading back to ashram Keith Platt keith@baysidenews.com.au DESPITE the appointment of receivers, police investigations into alleged sexual assaults and back room negotiations to avoid action under civil law, devotees are again attending Saturday night assemblies at the former headquarters of the Shiva School of Meditation and Yoga at Mt Eliza. The Tower Rd property was not listed as being part of the organisation’s assets when liquidators Worrells Solvency &amp; Forensic Accountants were appointed in April. As well as facing the possible sale of three residential properties in streets near to the Tower Rd ashram, Shiva Yoga Inc is also the subject of possible action by lawyer Angela Sdrinis. Another blow to the organisation may also come in the form of a reassessment of the tax free status it has enjoyed since being given the all clear by Australian Charities and Not-forprofits Commission (ACNC). “Where there is evidence of serious mismanagement or misappropriation, a persistent or deliberate breach of the ACNC Act, or where vulnerable people or significant charitable assets are at risk, the ACNC will act firmly and quickly,” a spokesperson for the ACNC said last week. “Where appropriate the ACNC will revoke a charity’s status – taking away access to Commonwealth charity tax concessions, which are administered by the Australian Taxation Office.” Although unable to comment on specific cases, the spokesperson said the revocation of tax-free status could

Temple sounds: Members of the Mt Eliza ashram, including leaders Russell Kruckman (also known as Swami Shankarananda and Swamiji) and Devi Ma were at the Shiva Vishnu temple in Carrum Downs in June for chanting and a performance by Melbourne-based “spiritual/world” band Sky of the Heart. Source: Facebook

be backdated to 3 December 2012. Financial statements for the year ended June 2014 of the tax-exempt Shiva Yoga Inc show $1.38m has been spent improving the ashram building and lists Swami Shankarananda as having loaned the organisation $373,508. The statements show “retained earnings” of $2.9m. The ATO has granted Shiva Yoga Inc a tax concession, GST concession, FBT rebate and income tax exemption. A former member of the ashram has previously told The Times that when filling out an application form seeking tax exemption “we all looked at

each other when it came to filling out the marked religion, and then someone said Hindu, so that’s what we put”. St Kilda lawyer Ms Sdrinis told The Times last week that she had spoken with about 20 men and women formally associated with the ashram over “a variety of issues”, including alleged sexual impropriety by the school’s spiritual leader Russell Kruckman; unpaid wages; taxation issues; whether “people were volunteers or employees”; donations; and donated works. Ms Sdrinis said she was specifically dealing with allegations by several women of sexual misconduct by Mr

Kruckman, who is also known as Swami Shankarananda and Swamiji. “We are trying to settle out of court.” Allegations of sexual assault by Mr Kruckman also continue to be investigated by the Seaford-based SOCIT (Sexual Offences and Child Abuse Investigation Teams). Ms Sdrinis said while she had not spoken with police “the liquidators have been good to deal with”. In December 2014, Mr Kruckman and the school stunned ashram devotees by issuing statements which in effect admitted he had engaged in “secret sexual relations with a number of

women from the ashram community”. The ensuing shockwaves led to a plummeting of the numbers attending the Saturday night assemblies, or Satsangs, and Mr Kruckman standing down as the school’s spiritual leader. The assemblies were moved private homes earlier this year, but are now being held at the Tower Rd ashram which is owned by Mr Kruckman and not Shiva Yoga Inc. While up to 350 people would attend these weekly assemblies before the scandal broke in late 2014, it appears numbers are now down to about 70. As previously reported by The Times, liquidator Paul Burness said Shiva Yoga owned three properties near the ashram, two in Petrel Ave and one in Clarendon Close. They are collectively valued at just under $3 million, although one has a mortgage. The most valuable property connected to the yoga school, the ashram in Tower Rd, is owned by Mr Kruckman (Swami Shankarananda) and is not subject to the liquidation. Mr Burness said Swami Shankarananda had placed caveats dated 22 April 2015 on the titles on one of Shiva Yoga’ Petrel Ave properties and the one in Clarendon Close. A further caveat had been lodged on the title of the Tower Rd property by Shiva Meditation Inc in 2005. The News has been unable to contact the ashram for comment. An email sent to spokesman Stephen Stanford was answered by a Vani Hudson who said: “All enquiries regarding Shiva Yoga should be directed to [the liquidator] Paul Burness of Worrells”.

Report: suburbs close to the edge Continued from Page 1 Dunkley Liberal MP Bruce Billson said intergenerational hardship is a problem in Frankston North and “innovative new approaches” are needed to break the cycle of poverty and change the lives of people who are confronting disadvantage. “The chaos in the lives of some needs to be replaced by calm and predictability to help those families and children,” he said. Mr Billson said this month’s announcement of $4.9 million in federal funding for Anglicare Victoria’s Community for Children plan (‘Children priority for care plan’, The Times 13/7/15) was a step towards trying to ensure children got the care, support

and opportunities “that should be available to all in our community”. The Small Business Minister, a former student at Frankston North’s Monterey Secondary College, said someone’s postcode should not determine their potential. “It’s important to get a normalised home environment to break the burdens of intergenerational hardship and support people back into work. Children are growing up in some household were employment is not part of their environment. “Children not being properly cared for is a troubling symptom and consequence of a range of other factors. It could be domestic violence, it may be alcohol misuse and substance abuse or

emotional and mental health illness issues that are contributing to the chaos in a young person’s life.” Frankston Labor state MP Paul Edbrooke said one of the main factors in breaking the cycle of disadvantage is education. He said Labor’s commitment to reversing the TAFE cuts imposed by the former Liberal National Coalition state government is about “ensuring access to high quality education”. He criticised Abbott government cuts to community grants earlier this year. “It meant that people in Frankston with a disability, as well as those experiencing homelessness, financial distress and family violence, were placed under even more pressure.

“I am in constant contact with welfare groups and would invite our Liberal Prime Minister to visit Frankston and explain to us exactly how increasing financial pressure on already vulnerable families by shamefully cutting health and education funding is helping us break the cycle of disadvantage,” Mr Edbrooke said. The member for Frankston says he does not support an increase in the GST because it would hit those on low incomes the hardest. He agreed the report highlighted endemic social problems in Frankston North. “Nobody likes these statistics but this is our home,” Mr Edbrooke said. “We have to do all we can to ensure

the Frankston community thrives.” Frankston North Community Centre coordinator Janet Reid said the council run centre sees “a lot of good things happening” in the area too. “We’re providing low-cost accessible training and education to help people step into employment,” she said. “The Frankston North community is fabulous and welcoming and engaging.” In the Dropping off the Edge report Frankston North ranked in the top 10 per cent of “most disadvantaged” suburbs Rosebud West, Hastings and Rosebud were also named as areas also suffering from entrenched disadvantage but were not listed in the top 10 per cent.

Bring in leaflet for your $10 discount. One leaflet per customer. Not valid with any other offer.