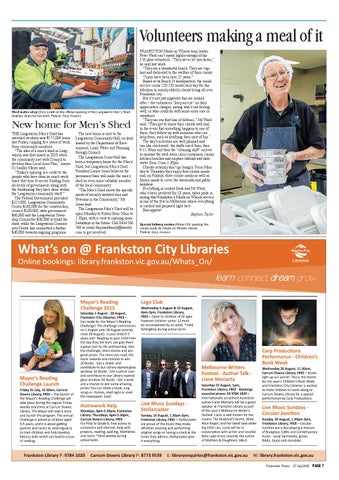 Volunteers making a meal of it

New home for Men’s Shed THE Langwarrin Men’s Shed has unveiled its shiny new $575,000 home last Friday, capping five years of work from community members. “The idea of a men’s shed in Langwarrin was first raised in 2010 when the community met with Council to develop their Local Area Plan,” mayor Cr Sandra Mayer said. “Today’s opening is a credit to the people who have done so much work since that time to secure funding from all levels of government, along with the fundraising they have done within the Langwarrin community itself.” The Federal Government provided $225,000, Langwarrin Community Centre $160,000 for the construction, council $100,000, state government $60,000 and the Langwarrin Township Committee $30,000 to build the shed, while the Langwarrin Community Centre has committed a further $40,000 towards ongoing programs.

The new home is next to the Langwarrin Community Hall, on land leased by the Department of Environment, Land, Water and Planning through Council. The Langwarrin Scout Hall has been a temporary home for the Men’s Shed, but Langwarrin Men’s Shed President Laurie Jones believes the permanent base will make the men’s shed an even more valuable member of the local community. “The Men’s Shed meets the specific needs of socially isolated men and Veterans in the Community,” Mr Jones said. The Langwarrin Men’s Shed will be open Monday to Friday from 10am to 2.30pm, with a view to opening some Saturdays in the future. Call 0434 506 768 or email thejonesfamily@saintly. com to get involved.

FRANKSTON Meals on Wheels team leader Peter Ward can’t speak highly enough of his 156-plus volunteers. “They never let you down,” he said last week. “They are a wonderful bunch. They are vigilant and dedicated to the welfare of their clients. “Some have been here 25 years.” Based at its Beach St headquarters, the meals service cooks 220-250 meals each day for distribution to mainly elderly clients living all over Frankston city. But it’s not just appetites that are looked after – the volunteers “keep an eye” on their appreciative charges; noting who’s not feeling well, or who could do with some extra care or assistance. “They are our first line of defence,” Mr Ward said. “They get to know their clients well and, in the event that something happens to one of them, they follow up with someone who can help them, such as notifying their next of kin.” The day’s activities are well planned and run like clockwork: the shifts run 6-8am, then 9-11.30am and then the “cleaning shift” arrives to sanitise the well-worn carry containers, cleans kitchen benches and empties rubbish and dishwater from 11am-1.30pm. Clients certainly don’t go hungry. From Monday to Thursday they enjoy four-course meals and, on Fridays, three course meals as well as frozen meals to cover the weekends and public holidays. Everything is cooked fresh and Mr Ward, who’s been involved for 18 years, takes pride in saying that Frankston’s Meals on Wheels service is one of the few in Melbourne where everything is cooked and prepared right here. Bon appetit! Stephen Taylor Special delivery service: Robert Orr packing the meals ready for Meals on Wheels clients. Picture: Gary Sissons