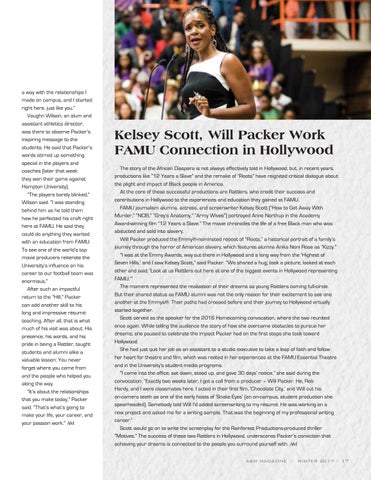 a way with the relationships I made on campus, and I started right here, just like you.” Vaughn Wilson, an alum and assistant athletics director, was there to observe Packer’s inspiring message to the students. He said that Packer’s words stirred up something special in the players and coaches (later that week they won their game against Hampton University). “The players barely blinked,” Wilson said. “I was standing behind him as he told them how he perfected his craft right here at FAMU. He said they could do anything they wanted with an education from FAMU. To see one of the world’s top movie producers reiterate the University’s influence on his career to our football team was enormous.” After such an impactful return to the “Hill,” Packer can add another skill to his long and impressive résumé: teaching. After all, that is what much of his visit was about. His presence, his words, and his pride in being a Rattler, taught students and alumni alike a valuable lesson: You never forget where you come from and the people who helped you along the way. “It’s about the relationships that you make today,” Packer said. “That’s what’s going to make your life, your career, and your passion work.”

Kelsey Scott, Will Packer Work FAMU Connection in Hollywood The story of the African Diaspora is not always effectively told in Hollywood, but, in recent years, productions like “12 Years a Slave” and the remake of “Roots” have reignited critical dialogue about the plight and impact of Black people in America. At the core of these successful productions are Rattlers, who credit their success and contributions in Hollywood to the experiences and education they gained at FAMU. FAMU journalism alumna, actress, and screenwriter Kelsey Scott (“How to Get Away With Murder,” “NCIS,” “Grey’s Anatomy,” “Army Wives”) portrayed Anne Northup in the Academy Award-winning film “12 Years a Slave.” The movie chronicles the life of a free Black man who was abducted and sold into slavery. Will Packer produced the Emmy®-nominated reboot of “Roots,” a historical portrait of a family’s journey through the horror of American slavery, which features alumna Anika Noni Rose as “Kizzy.” “I was at the Emmy Awards, way out there in Hollywood and a long way from the ‘Highest of Seven Hills,’ and I saw Kelsey Scott,” said Packer. “We shared a hug, took a picture, looked at each other and said, ‘Look at us Rattlers out here at one of the biggest events in Hollywood representing FAMU.’” The moment represented the realization of their dreams as young Rattlers coming full-circle. But their shared status as FAMU alumni was not the only reason for their excitement to see one another at the Emmys®. Their paths had crossed before and their journey to Hollywood virtually started together. Scott served as the speaker for the 2016 Homecoming convocation, where the two reunited once again. While telling the audience the story of how she overcame obstacles to pursue her dreams, she paused to celebrate the impact Packer had on the first steps she took toward Hollywood. She had just quit her job as an assistant to a studio executive to take a leap of faith and follow her heart for theatre and film, which was rooted in her experiences at the FAMU Essential Theatre and in the University’s student media programs. “I came into the office, sat down, stood up, and gave 30 days’ notice,” she said during the convocation. “Exactly two weeks later, I got a call from a producer – Will Packer. He, Rob Hardy, and I were classmates here. I acted in their first film, ‘Chocolate City,’ and Will cut his on-camera teeth as one of the early hosts of ‘Snake Eyes’ (an on-campus, student production she spearheaded). Somebody told Will I’d added screenwriting to my résumé. He was working on a new project and asked me for a writing sample. That was the beginning of my professional writing career.” Scott would go on to write the screenplay for the Rainforest Productions-produced thriller “Motives.” The success of these two Rattlers in Hollywood, underscores Packer’s conviction that achieving your dreams is connected to the people you surround yourself with. A&amp;M MAGAZINE // WINTER 2017 // 17

The Winter 2017 edition of the award-winning A&M Magazine celebrates remarkable milestones, including the accomplishments and anniversaries of the School of Nursing, School of the Environment, and the Marching "100." This issue also celebrates the resilient Rattlers who hold the FAMU banner up high, including none other than super producer Will Packer, who graces our cover. In an ever-changing film and television industry, Packer has successfully navigated the Hollywood scene and has become one of the most sought-after and respected producers of his time, including his newest role as executive producer of the hit BET show "Being Mary Jane." In this issue, we also highlight one of our tenacious students, Ijeoma Chiemela Ogala, who is our first international "Queen of Orange and Green." Another resilient Rattler highlighted in this issue is our very own interim president, Larry Robinson, Ph.D. He is celebrating his 20th anniversary as a member of the FAMU family. 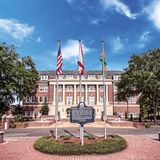