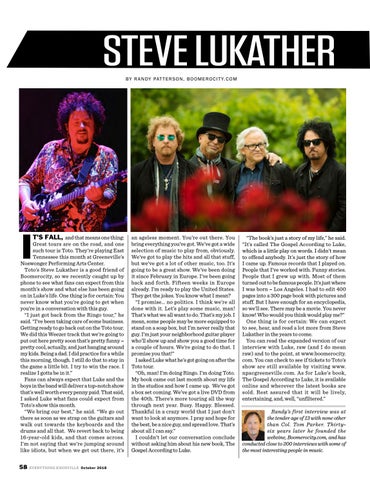 T’S FALL, and that means one thing:

Great tours are on the road, and one such tour is Toto. They’re playing East Tennessee this month at Greeneville’s Noswonger Performing Arts Center. Toto’s Steve Lukather is a good friend of Boomerocity, so we recently caught up by phone to see what fans can expect from this month’s show and what else has been going on in Luke’s life. One thing is for certain: You never know what you’re going to get when you’re in a conversation with this guy. “I just got back from the Ringo tour,” he said. “I’ve been taking care of some business. Getting ready to go back out on the Toto tour. We did this Weezer track that we’re going to put out here pretty soon that’s pretty funny – pretty cool, actually, and just hanging around my kids. Being a dad. I did practice for a while this morning, though. I still do that to stay in the game a little bit. I try to win the race. I realize I gotta be in it.” Fans can always expect that Luke and the boys in the band will deliver a top-notch show that’s well worth every penny paid. That said, I asked Luke what fans could expect from Toto’s show this month. “We bring our best,” he said. “We go out there as soon as we strap on the guitars and walk out towards the keyboards and the drums and all that. We revert back to being 16-year-old kids, and that comes across. I’m not saying that we’re jumping around like idiots, but when we get out there, it’s 58

an ageless moment. You’re out there. You bring everything you’ve got. We’ve got a wide selection of music to play from, obviously. We’ve got to play the hits and all that stuff, but we’ve got a lot of other music, too. It’s going to be a great show. We’ve been doing it since February in Europe. I’ve been going back and forth. Fifteen weeks in Europe already. I’m ready to play the United States. They get the jokes. You know what I mean? “I promise… no politics. I think we’re all done with it. Let’s play some music, man! That’s what we all want to do. That’s my job. I mean, some people may be more equipped to stand on a soap box, but I’m never really that guy. I’m just your neighborhood guitar player who’ll show up and show you a good time for a couple of hours. We’re going to do that. I promise you that!” I asked Luke what he’s got going on after the Toto tour. “Oh, man! I’m doing Ringo. I’m doing Toto. My book came out last month about my life in the studios and how I came up. We’ve got a box set coming. We’ve got a live DVD from the 40th. There’s more touring all the way through next year. Busy. Happy. Blessed. Thankful in a crazy world that I just don’t want to look at anymore. I pray and hope for the best, be a nice guy, and spread love. That’s about all I can say.” I couldn’t let our conversation conclude without asking him about his new book, The Gospel According to Luke.

“The book’s just a story of my life,” he said. “It’s called The Gospel According to Luke, which is a little play on words. I didn’t mean to offend anybody. It’s just the story of how I came up. Famous records that I played on. People that I’ve worked with. Funny stories. People that I grew up with. Most of them turned out to be famous people. It’s just where I was born – Los Angeles. I had to edit 400 pages into a 300 page book with pictures and stuff. But I have enough for an encyclopedia, so we’ll see. There may be a movie. You never know! Who would you think would play me?” One thing is for certain: We can expect to see, hear, and read a lot more from Steve Lukather in the years to come. You can read the expanded version of our interview with Luke, raw (and I do mean raw) and to the point, at www.boomerocity. com. You can check to see if tickets to Toto’s show are still available by visiting www. npacgreeneville.com. As for Luke’s book, The Gospel According to Luke, it is available online and wherever the latest books are sold. Rest assured that it will be lively, entertaining, and, well, “unfiltered.” Randy’s first interview was at the tender age of 13 with none other than Col. Tom Parker. Thirtysix years later he founded the webzine, Boomerocity.com, and has conducted close to 200 interviews with some of the most interesting people in music.