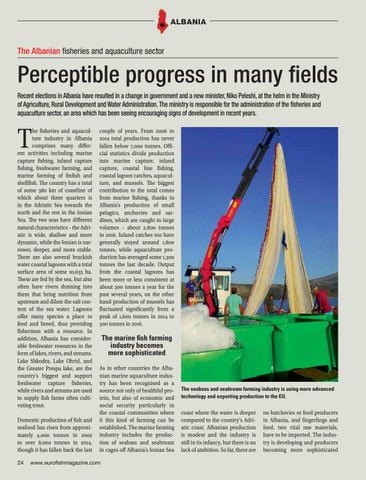 Perceptible progress in many ďŹ elds Recent elections in Albania have resulted in a change in government and a new minister, Niko Peleshi, at the helm in the Ministry of Agriculture, Rural Development and Water Administration. The ministry is responsible for the administration of the ďŹ sheries and aquaculture sector, an area which has been seeing encouraging signs of development in recent years.

he fisheries and aquaculture industry in Albania comprises many different activities including marine capture fishing, inland capture fishing, freshwater farming, and marine farming of finfish and shellfish. The country has a total of some 380 km of coastline of which about three quarters is in the Adriatic Sea towards the north and the rest in the Ionian Sea. The two seas have different natural characteristics â&#x20AC;&#x201C; the Adriatic is wide, shallow and more dynamic, while the Ionian is narrower, deeper, and more stable. There are also several brackish water coastal lagoons with a total surface area of some 10,635 ha. These are fed by the sea, but also often have rivers draining into them that bring nutrition from upstream and dilute the salt content of the sea water. Lagoons offer many species a place to feed and breed, thus providing fishermen with a resource. In addition, Albania has considerable freshwater resources in the form of lakes, rivers, and streams. Lake Shkodra, Lake Ohrid, and the Greater Prespa lake, are the countryâ&#x20AC;&#x2122;s biggest and support freshwater capture fisheries, while rivers and streams are used to supply fish farms often cultivating trout. Domestic production of fish and seafood has risen from approximately 4,000 tonnes in 2002 to over 8,000 tonnes in 2014, though it has fallen back the last

couple of years. From 2006 to 2014 total production has never fallen below 7,000 tonnes. Official statistics divide production into marine capture, inland capture, coastal line fishing, coastal lagoon catches, aquaculture, and mussels. The biggest contribution to the total comes from marine fishing, thanks to Albaniaâ&#x20AC;&#x2122;s production of small pelagics, anchovies and sardines, which are caught in large volumes â&#x20AC;&#x201C; about 2,800 tonnes in 2016. Inland catches too have generally stayed around 1,800 tonnes, while aquaculture production has averaged some 1,300 tonnes the last decade. Output from the coastal lagoons has been more or less consistent at about 300 tonnes a year for the past several years, on the other hand production of mussels has fluctuated significantly from a peak of 1,600 tonnes in 2014 to 300 tonnes in 2016.

The marine fish farming industry becomes more sophisticated As in other countries the Albanian marine aquaculture industry has been recognised as a source not only of healthful protein, but also of economic and social security particularly in the coastal communities where it this kind of farming can be established. The marine farming industry includes the production of seabass and seabream in cages off Albaniaâ&#x20AC;&#x2122;s Ionian Sea

The seabass and seabream farming industry is using more advanced technology and exporting production to the EU.

coast where the water is deeper compared to the countryâ&#x20AC;&#x2122;s Adriatic coast. Albanian production is modest and the industry is still in its infancy, but there is no lack of ambition. So far, there are

no hatcheries or feed producers in Albania, and fingerlings and feed, two vital raw materials, have to be imported. The industry is developing and producers becoming more sophisticated