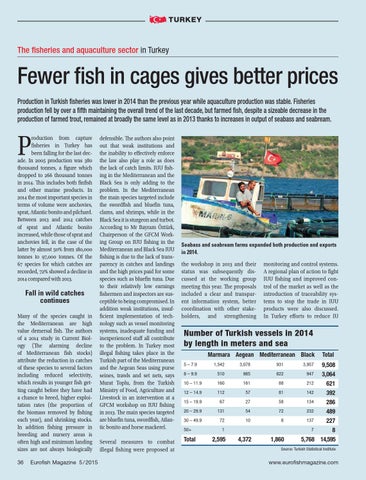 Fewer ďŹ sh in cages gives better prices Production in Turkish ďŹ sheries was lower in 2014 than the previous year while aquaculture production was stable. Fisheries production fell by over a ďŹ fth maintaining the overall trend of the last decade, but farmed ďŹ sh, despite a sizeable decrease in the production of farmed trout, remained at broadly the same level as in 2013 thanks to increases in output of seabass and seabream.

roduction from capture fisheries in Turkey has been falling for the last decade. In 2005 production was 380 thousand tonnes, a figure which dropped to 266 thousand tonnes in 2014. This includes both finfish and other marine products. In 2014 the most important species in terms of volume were anchovies, sprat, Atlantic bonito and pilchard. Between 2013 and 2014 catches of sprat and Atlantic bonito increased, while those of sprat and anchovies fell, in the case of the latter by almost 50ď&#x2122;&#x201A; from 180,000 tonnes to 97,000 tonnes. Of the 67 species for which catches are recorded, 72ď&#x2122;&#x201A; showed a decline in 2014 compared with 2013.

Fall in wild catches continues Many of the species caught in the Mediterranean are high value demersal fish. The authors of a 2014 study in Current Biology (The alarming decline of Mediterranean fish stocks) attribute the reduction in catches of these species to several factors including reduced selectivity, which results in younger fish getting caught before they have had a chance to breed, higher exploitation rates (the proportion of the biomass removed by fishing each year), and shrinking stocks. In addition fishing pressure in breeding and nursery areas is often high and minimum landing sizes are not always biologically 36

defensible. The authors also point out that weak institutions and the inability to effectively enforce the law also play a role as does the lack of catch limits. IUU fishing in the Mediterranean and the Black Sea is only adding to the problem. In the Mediterranean the main species targeted include the swordfish and bluefin tuna, clams, and shrimps, while in the Black Sea it is sturgeon and turbot. According to Mr Bayram Ă&#x2013;ztĂźrk, Chairperson of the GFCM Working Group on IUU fishing in the Mediterranean and Black Sea IUU fishing is due to the lack of transparency in catches and landings and the high prices paid for some species such as bluefin tuna. Due to their relatively low earnings fishermen and inspectors are susceptible to being compromised. In addition weak institutions, insufficient implementation of technology such as vessel monitoring systems, inadequate funding and inexperienced staff all contribute to the problem. In Turkey most illegal fishing takes place in the Turkish part of the Mediterranean and the Aegean Seas using purse seines, trawls and set nets, says Murat Toplu, from the Turkish Ministry of Food, Agriculture and Livestock in an intervention at a GFCM workshop on IUU fishing in 2013. The main species targeted are bluefin tuna, swordfish, Atlantic bonito and horse mackerel. Several measures to combat illegal fishing were proposed at

Seabass and seabream farms expanded both production and exports in 2014.

the workshop in 2013 and their status was subsequently discussed at the working group meeting this year. The proposals included a clear and transparent information system, better coordination with other stakeholders, and strengthening

monitoring and control systems. A regional plan of action to fight IUU fishing and improved control of the market as well as the introduction of traceability systems to stop the trade in IUU products were also discussed. In Turkey efforts to reduce IU