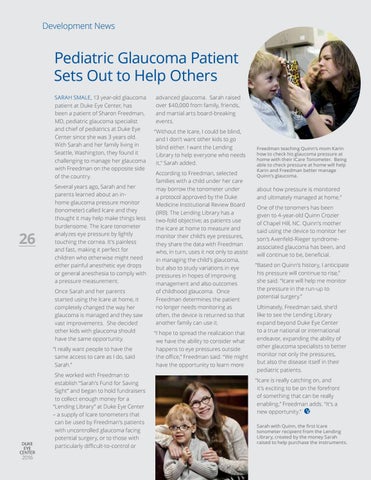 Pediatric Glaucoma Patient Sets Out to Help Others SARAH SMALE, 13 year-old glaucoma patient at Duke Eye Center, has been a patient of Sharon Freedman, MD, pediatric glaucoma specialist and chief of pediatrics at Duke Eye Center since she was 3 years old. With Sarah and her family living in Seattle, Washington, they found it challenging to manage her glaucoma with Freedman on the opposite side of the country.

Several years ago, Sarah and her parents learned about an inhome glaucoma pressure monitor (tonometer) called Icare and they thought it may help make things less burdensome. The Icare tonometer analyzes eye pressure by lightly touching the cornea. It’s painless and fast, making it perfect for children who otherwise might need either painful anesthetic eye drops or general anesthesia to comply with a pressure measurement. Once Sarah and her parents started using the Icare at home, it completely changed the way her glaucoma is managed and they saw vast improvements. She decided other kids with glaucoma should have the same opportunity. “I really want people to have the same access to care as I do, said Sarah.”

She worked with Freedman to establish “Sarah’s Fund for Saving Sight” and began to hold fundraisers to collect enough money for a “Lending Library” at Duke Eye Center – a supply of Icare tonometers that can be used by Freedman’s patients with uncontrolled glaucoma facing potential surgery, or to those with particularly difficult-to-control or

advanced glaucoma. Sarah raised over $40,000 from family, friends, and martial arts board-breaking events. “Without the Icare, I could be blind, and I don’t want other kids to go blind either. I want the Lending Library to help everyone who needs it,” Sarah added. According to Freedman, selected families with a child under her care may borrow the tonometer under a protocol approved by the Duke Medicine Institutional Review Board (IRB). The Lending Library has a two-fold objective; as patients use the Icare at home to measure and monitor their child’s eye pressures, they share the data with Freedman who, in turn, uses it not only to assist in managing the child’s glaucoma, but also to study variations in eye pressures in hopes of improving management and also outcomes of childhood glaucoma. Once Freedman determines the patient no longer needs monitoring as often, the device is returned so that another family can use it. “I hope to spread the realization that we have the ability to consider what happens to eye pressures outside the office,” Freedman said. “We might have the opportunity to learn more

about how pressure is monitored and ultimately managed at home.” One of the tonomers has been given to 4-year-old Quinn Crozier of Chapel Hill, NC. Quinn’s mother said using the device to monitor her son’s Axenfeld-Rieger syndromeassociated glaucoma has been, and will continue to be, beneficial. “Based on Quinn’s history, I anticipate his pressure will continue to rise,” she said. “Icare will help me monitor the pressure in the run-up to potential surgery.” Ultimately, Freedman said, she’d like to see the Lending Library expand beyond Duke Eye Center to a true national or international endeavor, expanding the ability of other glaucoma specialists to better monitor not only the pressures, but also the disease itself in their pediatric patients. “Icare is really catching on, and it’s exciting to be on the forefront of something that can be really enabling,” Freedman adds. “It’s a new opportunity.” V Sarah with Quinn, the first Icare tonometer recipient from the Lending Library, created by the money Sarah raised to help purchase the instruments. 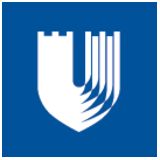