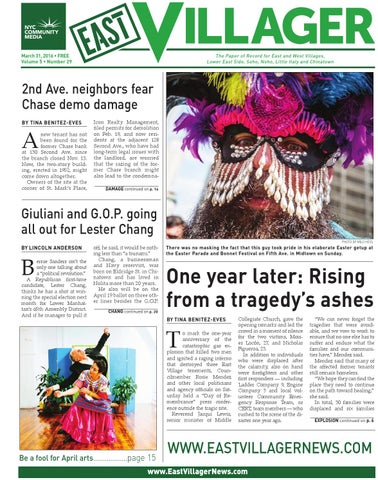 new tenant has not been found for the former Chase bank at 130 Second Ave. since the branch closed Nov. 13. Now, the two-story building, erected in 1952, might come down altogether. Owners of the site at the corner of St. Mark’s Place,

Icon Realty Management, filed permits for demolition on Feb. 19, and now residents at the adjacent 128 Second Ave., who have had long-term legal issues with the landlord, are worried that the razing of the former Chase branch might also lead to the condemnaDAMAGE continued on p. 14

Giuliani and G.O.P. going all out for Lester Chang BY LINCOLN ANDERSON

ernie Sanders isn’t the only one talking about a “political revolution.” A Republican first-time candidate, Lester Chang, thinks he has a shot at winning the special election next month for Lower Manhattan’s 65th Assembly District. And if he manages to pull it

off, he said, it would be nothing less than “a tsunami.” Chang, a businessman and Navy reservist, was born on Eldridge St. in Chinatown and has lived in Nolita more than 20 years. He also will be on the April 19 ballot on three other lines besides the G.O.P. CHANG continued on p. 20

There was no masking the fact that this guy took pride in his elaborate Easter getup at the Easter Parade and Bonnet Festival on Fifth Ave. in Midtown on Sunday.

One year later: Rising from a tragedy’s ashes BY TINA BENITEZ-EVES

Collegiate Church, gave the opening remarks and led the crowd in a moment of silence for the two victims, Moises Locón, 27, and Nicholas Figueroa, 23. In addition to individuals who were displaced after the calamity, also on hand were firefighters and other first responders — including Ladder Company 9, Engine Company 3 and local volunteer Community Emergency Response Team, or CERT, team members — who rushed to the scene of the disaster one year ago.

“We can never forget the tragedies that were avoidable, and we vow to work to ensure that no one else has to suffer and endure what the families and our communities have,” Mendez said. Mendez said that many of the affected former tenants still remain homeless. “We hope they can find the place they need to continue on the path toward healing,” she said. In total, 30 families were displaced and six families EXPLOSION continued on p. 6