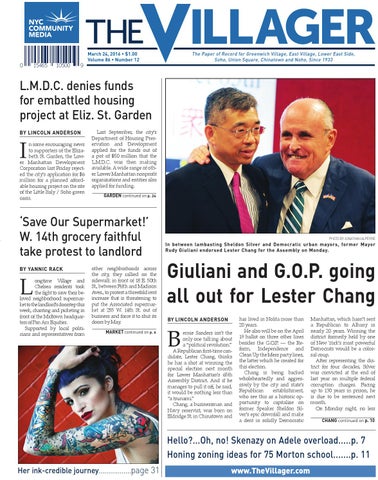 n some encouraging news to supporters of the Elizabeth St. Garden, the Lower Manhattan Development Corporation last Friday rejected the city’s application for $6 million for a planned affordable housing project on the site of the Little Italy / Soho green oasis.

Last September, the city’s Department of Housing Preservation and Development applied for the funds out of a pot of $50 million that the L.M.D.C. was then making available. A wide range of other Lower Manhattan nonprofit organizations and entities also applied for funding. GARDEN continued on p. 24

ongtime Village and Chelsea residents took the fight to save their beloved neighborhood supermarket to the landlord’s doorstep this week, chanting and picketing in front of the Midtown headquarters of Pan Am Equities. Supported by local politicians and representatives from

other neighborhoods across the city, they rallied on the sidewalk in front of 18 E. 50th St., between Fifth and Madison Aves., to protest a threefold rent increase that is threatening to put the Associated supermarket at 255 W. 14th St. out of business and force it to shut its doors by May. MARKET continued on p. 6

Giuliani and G.O.P. going all out for Lester Chang BY LINCOLN ANDERSON

ernie Sanders isn’t the only one talking about a “political revolution.” A Republican first-time candidate, Lester Chang, thinks he has a shot at winning the special election next month for Lower Manhattan’s 65th Assembly District. And if he manages to pull it off, he said, it would be nothing less than “a tsunami.” Chang, a businessman and Navy reservist, was born on Eldridge St. in Chinatown and

has lived in Nolita more than 20 years. He also will be on the April 19 ballot on three other lines besides the G.O.P. — the Reform, Independence and Clean Up the Mess party lines, the latter which he created for this election. Chang is being backed wholeheartedly and aggressively by the city and state’s Republican establishment, who see this as a historic opportunity to capitalize on former Speaker Sheldon Silver’s epic downfall and make a dent in solidly Democratic

Manhattan, which hasn’t sent a Republican to Albany in nearly 20 years. Winning the district formerly held by one of New York’s most powerful Democrats would be a colossal coup. After representing the district for four decades, Silver was convicted at the end of last year on multiple federal corruption charges. Facing up to 130 years in prison, he is due to be sentenced next month. On Monday night, no less CHANG continued on p. 10