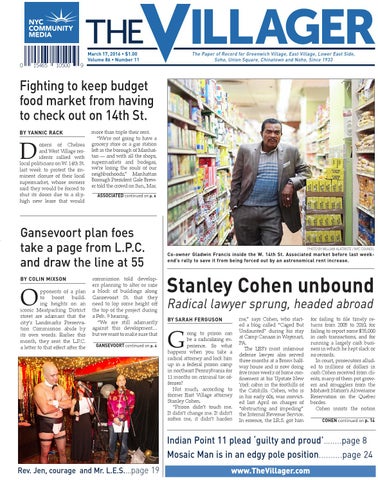 Fighting to keep budget food market from having to check out on 14th St. BY YANNIC RACK

ozens of Chelsea and West Village residents rallied with local politicians on W. 14th St. last week to protest the imminent closure of their local supermarket, whose owners said they would be forced to shut its doors due to a skyhigh new lease that would

more than triple their rent. “We’re not going to have a grocery store or a gas station left in the borough of Manhattan — and with all the shops, supermarkets and bodegas, we’re losing the souls of our neighborhoods,” Manhattan Borough President Gale Brewer told the crowd on Sun., Mar. ASSOCIATED continued on p. 6

Gansevoort plan foes take a page from L.P.C. and draw the line at 55 BY COLIN MIXSON

pponents of a plan to boost building heights on an iconic Meatpacking District street are adamant that the city’s Landmarks Preservation Commission abide by its own words. Earlier this month, they sent the L.P.C. a letter to that effect after the

commission told developers planning to alter or raze a block of buildings along Gansevoort St. that they need to lop some height off the top of the project during a Feb. 9 hearing. “We are still adamantly against this development… but we want to make sure that GANSEVOORT continued on p. 4

Co-owner Gladwin Francis inside the W. 14th St. Associated market before last weekend’s rally to save it from being forced out by an astronomical rent increase.

oing to prison can be a radicalizing experience. So what happens when you take a radical attorney and lock him up in a federal prison camp in northeast Pennsylvania for 11 months on criminal tax offenses? Not much, according to former East Village attorney Stanley Cohen. “Prison didn’t touch me. It didn’t change me. It didn’t soften me, it didn’t harden

me,” says Cohen, who started a blog called “Caged But Undaunted” during his stay at Camp Canaan in Waymart, PA. The LES’s most infamous defense lawyer also served three months at a Bronx halfway house and is now doing five more weeks of home confinement at his Upstate New York cabin in the foothills of the Catskills. Cohen, who is in his early 60s, was convicted last April on charges of “obstructing and impeding” the Internal Revenue Service. In essence, the I.R.S. got him

for failing to file timely returns from 2005 to 2010, for failing to report some $35,000 in cash transactions, and for running a largely cash business in which he kept slack or no records. In court, prosecutors alluded to millions of dollars in cash Cohen received from clients, many of them pot growers and smugglers from the Mohawk Nation’s Akwesasne Reservation on the Quebec border. Cohen insists the notion COHEN continued on p. 14