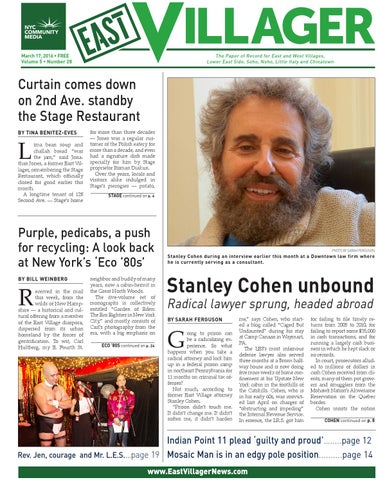 Curtain comes down on 2nd Ave. standby the Stage Restaurant BY TINA BENITEZ-EVES

for more than three decades — Jones was a regular customer of the Polish eatery for more than a decade, and even had a signature dish made specially for him by Stage proprietor Roman Diakun. Over the years, locals and visitors alike indulged in Stage’s pierogies — potato, STAGE continued on p. 4

Purple, pedicabs, a push for recycling: A look back at New York’s ‘Eco ’80s’ BY BILL WEINBERG

eceived in the mail this week, from the wilds of New Hampshire — a historical and cultural offering from a member of the East Village diaspora, dispersed from its urban homeland by the forces of gentrification. To wit, Carl Hultberg, my E. Fourth St.

neighbor and buddy of many years, now a cabin-hermit in the Great North Woods. The five-volume set of monographs is collectively entitled “Garden of Eden: The Eco Eighties in New York City,” and mostly consists of Carl’s photography from the era, with a big emphasis on ECO ’80S continued on p. 24

Stanley Cohen during an interview earlier this month at a Downtown law firm where he is currently serving as a consultant.

oing to prison can be a radicalizing experience. So what happens when you take a radical attorney and lock him up in a federal prison camp in northeast Pennsylvania for 11 months on criminal tax offenses? Not much, according to former East Village attorney Stanley Cohen. “Prison didn’t touch me. It didn’t change me. It didn’t soften me, it didn’t harden

me,” says Cohen, who started a blog called “Caged But Undaunted” during his stay at Camp Canaan in Waymart, PA. The LES’s most infamous defense lawyer also served three months at a Bronx halfway house and is now doing five more weeks of home confinement at his Upstate New York cabin in the foothills of the Catskills. Cohen, who is in his early 60s, was convicted last April on charges of “obstructing and impeding” the Internal Revenue Service. In essence, the I.R.S. got him

for failing to file timely returns from 2005 to 2010, for failing to report some $35,000 in cash transactions, and for running a largely cash business in which he kept slack or no records. In court, prosecutors alluded to millions of dollars in cash Cohen received from clients, many of them pot growers and smugglers from the Mohawk Nation’s Akwesasne Reservation on the Quebec border. Cohen insists the notion COHEN continued on p. 8