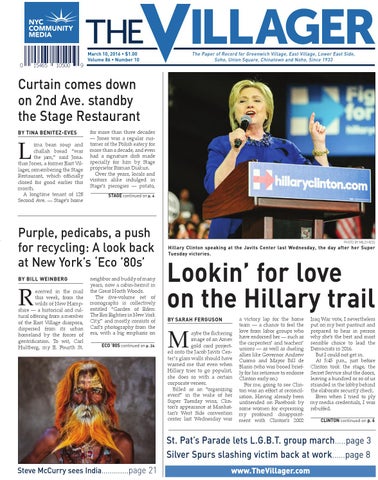 Curtain comes down on 2nd Ave. standby the Stage Restaurant BY TINA BENITEZ-EVES

for more than three decades — Jones was a regular customer of the Polish eatery for more than a decade, and even had a signature dish made specially for him by Stage proprietor Roman Diakun. Over the years, locals and visitors alike indulged in Stage’s pierogies — potato, STAGE continued on p. 4

Purple, pedicabs, a push for recycling: A look back at New York’s ‘Eco ’80s’ BY BILL WEINBERG

eceived in the mail this week, from the wilds of New Hampshire — a historical and cultural offering from a member of the East Village diaspora, dispersed from its urban homeland by the forces of gentrification. To wit, Carl Hultberg, my E. Fourth St.

neighbor and buddy of many years, now a cabin-hermit in the Great North Woods. The five-volume set of monographs is collectively entitled “Garden of Eden: The Eco Eighties in New York City,” and mostly consists of Carl’s photography from the era, with a big emphasis on ECO ’80S continued on p. 24

Hillary Clinton speaking at the Javits Center last Wednesday, the day after her Super Tuesday victories.

Lookin’ for love on the Hillary trail BY SARAH FERGUSON

aybe the flickering image of an Amex gold card projected onto the Jacob Javits Center’s glass walls should have warned me that even when Hillary tries to go populist, she does so with a certain corporate veneer. Billed as an “organizing event” in the wake of her Super Tuesday wins, Clinton’s appearance at Manhattan’s West Side convention center last Wednesday was

a victory lap for the home team — a chance to feel the love from labor groups who have endorsed her — such as the carpenters’ and teachers’ unions — as well as dueling allies like Governor Andrew Cuomo and Mayor Bill de Blasio (who was booed briefly for his reticence to endorse Clinton early on.) For me, going to see Clinton was an effort at reconciliation. Having already been unfriended on Facebook by some women for expressing my profound disappointment with Clinton’s 2002

Iraq War vote, I nevertheless put on my best pantsuit and prepared to hear in person why she’s the best and most sensible choice to lead the Democrats in 2016. But I could not get in. At 5:45 p.m., just before Clinton took the stage, the Secret Service shut the doors, leaving a hundred or so of us stranded in the lobby behind the elaborate security check. Even when I tried to ply my media credentials, I was rebuffed. CLINTON continued on p. 6