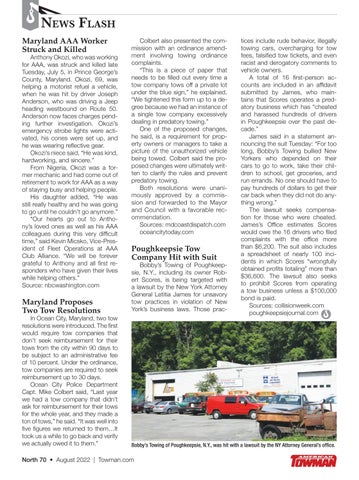 Anthony Okozi, who was working for AAA, was struck and killed late Tuesday, July 5, in Prince George’s County, Maryland. Okozi, 69, was helping a motorist refuel a vehicle, when he was hit by driver Joseph Anderson, who was driving a Jeep heading westbound on Route 50. Anderson now faces charges pending further investigation. Okozi’s emergency strobe lights were activated, his cones were set up, and he was wearing reflective gear. Okozi’s niece said, “He was kind, hardworking, and sincere.” From Nigeria, Okozi was a former mechanic and had come out of retirement to work for AAA as a way of staying busy and helping people. His daughter added, “He was still really healthy and he was going to go until he couldn’t go anymore.” “Our hearts go out to Anthony’s loved ones as well as his AAA colleagues during this very difficult time,” said Kevin Micsko, Vice-President of Fleet Operations at AAA Club Alliance. “We will be forever grateful to Anthony and all first responders who have given their lives while helping others.” Source: nbcwashington.com

In Ocean City, Maryland, two tow resolutions were introduced. The first would require tow companies that don’t seek reimbursement for their tows from the city within 90 days to be subject to an administrative fee of 10 percent. Under the ordinance, tow companies are required to seek reimbursement up to 30 days. Ocean City Police Department Capt. Mike Colbert said, “Last year we had a tow company that didn’t ask for reimbursement for their tows for the whole year, and they made a ton of tows,” he said. “It was well into five figures we returned to them…It took us a while to go back and verify we actually owed it to them.”

Colbert also presented the commission with an ordinance amendment involving towing ordinance complaints. “This is a piece of paper that needs to be filled out every time a tow company tows off a private lot under the blue sign,” he explained. “We tightened this form up to a degree because we had an instance of a single tow company excessively dealing in predatory towing.” One of the proposed changes, he said, is a requirement for property owners or managers to take a picture of the unauthorized vehicle being towed. Colbert said the proposed changes were ultimately written to clarify the rules and prevent predatory towing. Both resolutions were unanimously approved by a commission and forwarded to the Mayor and Council with a favorable recommendation. Sources: mdcoastdispatch.com oceancitytoday.com

Bobby’s Towing of Poughkeepsie, N.Y., including its owner Robert Scores, is being targeted with a lawsuit by the New York Attorney General Letitia James for unsavory tow practices in violation of New York’s business laws. Those prac-

tices include rude behavior, illegally towing cars, overcharging for tow fees, falsified tow tickets, and even racist and derogatory comments to vehicle owners. A total of 16 first-person accounts are included in an affidavit submitted by James, who maintains that Scores operates a predatory business which has “cheated and harassed hundreds of drivers in Poughkeepsie over the past decade.” James said in a statement announcing the suit Tuesday: “For too long, Bobby’s Towing bullied New Yorkers who depended on their cars to go to work, take their children to school, get groceries, and run errands. No one should have to pay hundreds of dollars to get their car back when they did not do anything wrong.” The lawsuit seeks compensation for those who were cheated. James’s Office estimates Scores would owe the 16 drivers who filed complaints with the office more than $6,200. The suit also includes a spreadsheet of nearly 100 incidents in which Scores “wrongfully obtained profits totaling” more than $36,600. The lawsuit also seeks to prohibit Scores from operating a tow business unless a $100,000 bond is paid. Sources: collisionweek.com poughkeepsiejournal.com

Bobby’s Towing of Poughkeepsie, N.Y., was hit with a lawsuit by the NY Attorney General’s office.