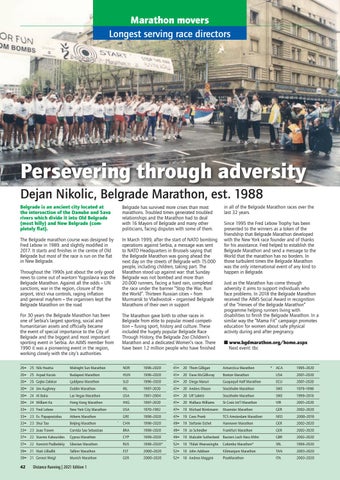 Persevering through adversity Dejan Nikolic, Belgrade Marathon, est. 1988 Belgrade is an ancient city located at the intersection of the Danube and Sava rivers which divide it into Old Belgrade (most hilly) and New Belgrade (completely flat).

Belgrade has survived more crises than most marathons. Troubled times generated troubled relationships and the Marathon had to deal with 16 Mayors of Belgrade and many other politicians, facing disputes with some of them.

The Belgrade marathon course was designed by Fred Lebow in 1989. and slightly modified in 2017. It starts and finishes in the centre of Old Belgrade but most of the race is run on the flat in New Belgrade.

In March 1999, after the start of NATO bombing operations against Serbia, a message was sent to NATO Headquarters in Brussels saying that the Belgrade Marathon was going ahead the next day on the streets of Belgrade with 15.000 people, including children, taking part. The Marathon stood up against war: that Sunday Belgrade was not bombed and more than 20.000 runners, facing a hard rain, completed the race under the banner “Stop the War, Run the World”. Thirteen Russian cities – from Murmansk to Vladivostok – organised Belgrade Marathons of their own in support

Throughout the 1990s just about the only good news to come out of war-torn Yugoslavia was the Belgrade Marathon. Against all the odds – UN sanctions, war in the region, closure of the airport, strict visa controls, raging inflation and general mayhem – the organisers kept the Belgrade Marathon on the road For 30 years the Belgrade Marathon has been one of Serbia’s largest sporting, social and humanitarian assets and officially became the event of special importance to the City of Belgrade and the biggest and most important sporting event in Serbia. An AIMS member from 1990 it was a pioneering event in the region, working closely with the city’s authorities.

The Marathon gave birth to other races in Belgrade from elite to popular mixed competition – fusing sport, history and culture. These included the hugely popular Belgrade Race Through History, the Belgrade Zoo Children’s Marathon and a dedicated Women’s race. There have been 1.2 million people who have finished 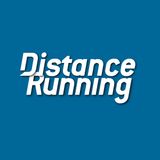