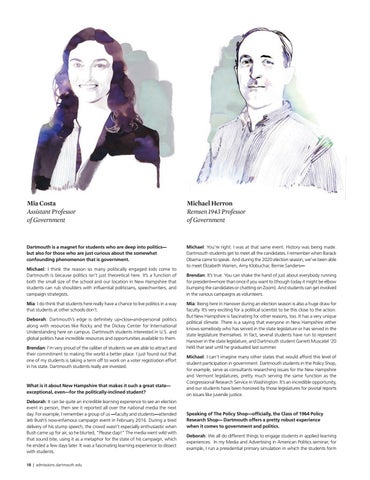 Dartmouth is a magnet for students who are deep into politics— but also for those who are just curious about the somewhat confounding phenomenon that is government.

Michael: You’re right. I was at that same event. History was being made. Dartmouth students get to meet all the candidates. I remember when Barack Obama came to speak. And during the 2020 election season, we’ve been able to meet Elizabeth Warren, Amy Klobuchar, Bernie Sanders—

Michael: I think the reason so many politically engaged kids come to Dartmouth is because politics isn’t just theoretical here. It’s a function of both the small size of the school and our location in New Hampshire that students can rub shoulders with influential politicians, speechwriters, and campaign strategists. Mia: I do think that students here really have a chance to live politics in a way that students at other schools don’t. Deborah: Dartmouth’s edge is definitely up-close-and-personal politics along with resources like Rocky and the Dickey Center for International Understanding here on campus. Dartmouth students interested in U.S. and global politics have incredible resources and opportunities available to them. Brendan: I’m very proud of the caliber of students we are able to attract and their commitment to making the world a better place. I just found out that one of my students is taking a term off to work on a voter registration effort in his state. Dartmouth students really are invested.

What is it about New Hampshire that makes it such a great state— exceptional, even—for the politically-inclined student? Deborah: It can be quite an incredible learning experience to see an election event in person, then see it reported all over the national media the next day. For example, I remember a group of us —faculty and students—attended Jeb Bush’s now-infamous campaign event in February 2016. During a tired delivery of his stump speech, the crowd wasn’t especially enthusiastic when Bush came up for air, so he blurted, “Please clap!” The media went wild with that sound bite, using it as a metaphor for the state of his campaign, which he ended a few days later. It was a fascinating learning experience to dissect with students. 18 | admissions.dartmouth.edu

Brendan: It’s true. You can shake the hand of just about everybody running for president—more than once if you want to (though today it might be elbow bumping the candidates or chatting on Zoom). And students can get involved in the various campaigns as volunteers. Mia: Being here in Hanover during an election season is also a huge draw for faculty. It’s very exciting for a political scientist to be this close to the action. But New Hampshire is fascinating for other reasons, too. It has a very unique political climate. There is a saying that everyone in New Hampshire either knows somebody who has served in the state legislature or has served in the state legislature themselves. In fact, several students have run to represent Hanover in the state legislature, and Dartmouth student Garrett Muscatel '20 held that seat until he graduated last summer. Michael: I can’t imagine many other states that would afford this level of student participation in government. Dartmouth students in the Policy Shop, for example, serve as consultants researching issues for the New Hampshire and Vermont legislatures, pretty much serving the same function as the Congressional Research Service in Washington. It’s an incredible opportunity, and our students have been honored by those legislatures for pivotal reports on issues like juvenile justice.

Speaking of The Policy Shop—officially, the Class of 1964 Policy Research Shop— Dartmouth offers a pretty robust experience when it comes to government and politics. Deborah: We all do different things to engage students in applied learning experiences. In my Media and Advertising in American Politics seminar, for example, I run a presidential primary simulation in which the students form 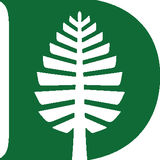