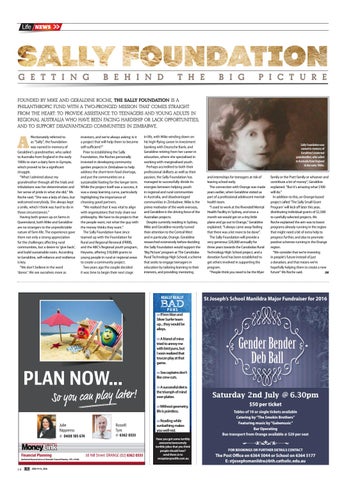 FOUNDED BY MIKE AND GERALDINE ROCHE, THE SALLY FOUNDATION IS A PHILANTHROPIC FUND WITH A TWO-PRONGED MISSION THAT COMES STRAIGHT FROM THE HEART: TO PROVIDE ASSISTANCE TO TEENAGERS AND YOUNG ADULTS IN REGIONAL AUSTRALIA WHO HAVE BEEN FACING HARDSHIP OR LACK OPPORTUNITIES; AND TO SUPPORT DISADVANTAGED COMMUNITIES IN ZIMBABWE.

ffectionately referred to as “Sally”, the foundation was named in memory of Geraldine’s grandmother, who sailed to Australia from England in the early 1900s to start a dairy farm in Gympie, which proved to be a significant struggle. “What I admired about my grandmother through all the trials and tribulations was her determination and her sense of pride in what she did,” Ms Roche said. “She was a lady of class, but welcomed everybody. She always kept a smile, which I think was hard to do in those circumstances.” Having both grown up on farms in Queensland, both Mike and Geraldine are no strangers to the unpredictable nature of farm life. The experience gave them not only a strong appreciation for the challenges affecting rural communities, but a desire to ‘give back’, and build sustainable roots. According to Geraldine, self-reliance and resilience is key. “We don’t believe in the word ‘donor’. We see ourselves more as

investors, and we’re always asking: is it a project that will help them to become self-sufficient?’’ Prior to establishing the Sally Foundation, the Roches personally invested in developing community garden projects in Zimbabwe to help address the short-term food shortage, and put the communities on a sustainable footing for the longer term. While the project itself was a success, it was a steep learning curve, particularly highlighting the importance of choosing good partners. “We realised that it was vital to align with organisations that truly share our philosophy. We have to do projects that the people want, not what the guy with the money thinks they want.” The Sally Foundation have since teamed up with the Foundation for Rural and Regional Renewal (FRRR), and the ABC’s Regional youth program, Heywire, offering $10,000 grants to young people in rural or regional areas to create a community project. Two years ago the couple decided it was time to begin their next stage

in life, with Mike winding down on his high-flying career in investment banking with Deutsche Bank, and Geraldine retiring from her career in education, where she specialised in working with marginalised youth. Perhaps accredited to both their professional skillsets as well as their passion, the Sally Foundation has managed to successfully divide its energies between helping youth in regional and rural communities in Australia, and disadvantaged communities in Zimbabwe. Mike is the prime motivator of the work overseas, and Geraldine is the driving force of the Australian projects. Despite currently residing in Sydney, Mike and Geraldine recently turned their attention to the Central West and in particular, Orange. Geraldine researched extensively before deciding the Sally Foundation would support the ‘Big Picture’ program at The Canobolas Rural Technology High School; a scheme that seeks to engage teenagers in education by tailoring learning to their interests, and providing mentoring

Sally Foundation was named in memory of Geraldine’s maternal grandmother, who sailed to Australia from England in the early 1900s.

and internships for teenagers at risk of leaving school early. The connection with Orange was made years earlier, when Geraldine visited as part of a professional adolescent mentalhealth team. “I used to work at the Rivendell Mental Health Facility in Sydney, and once a month we would get on a tiny little plane and go out to Orange,” Geraldine explained. “I always came away feeling that there was a lot more to be done”. The Sally Foundation will provide a very generous $20,000 annually for three years towards the Canobolas Rural Technology High School project, and a donation fund has been established to get others involved in supporting the program. “People think you need to be the Myer

family or the Pratt family or whoever and contribute a lot of money”, Geraldine explained. “But it’s amazing what $100 will do.” In addition to this, an Orange-based project called ‘The Sally Small Grant Program’ will kick off later this year, distributing individual grants of $2,500 to carefully selected projects. Ms Roche explained the aim was to boost programs already running in the region that might need a bit of extra help to progress further, and also to promote positive schemes running in the Orange region. “We consider that we’re investing in people’s future instead of just a donation, and that means we’re hopefully helping them to create a new future” Ms Roche said. DM

If Iron Man and Silver Surfer team up... they would be alloys.

So you can play later!

So you can play later!

A friend of mine tried to annoy me with bird puns, but I soon realized that toucan play at that game. Sea captains don’t like crew cuts. A successful diet is the triumph of mind over platter. Without geometry, life is pointless. Reading while sunbathing makes you well-red. Have you got some terribly awesome/awesomely terrible jokes that you think people should hear? send them in to reception@oclife.com.au

A GREAT READ EACH WEEK! 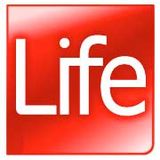