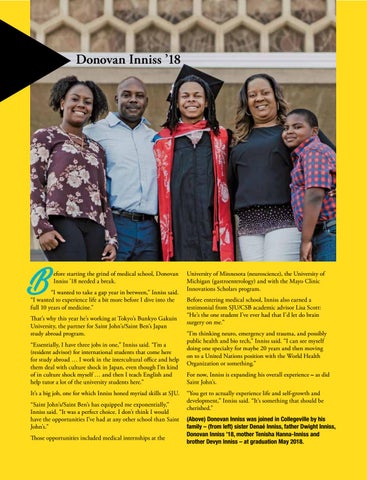 efore starting the grind of medical school, Donovan Inniss ’18 needed a break. “I wanted to take a gap year in between,” Inniss said. “I wanted to experience life a bit more before I dive into the full 10 years of medicine.” That’s why this year he’s working at Tokyo’s Bunkyo Gakuin University, the partner for Saint John’s/Saint Ben’s Japan study abroad program. “Essentially, I have three jobs in one,” Inniss said. “I’m a (resident advisor) for international students that come here for study abroad … I work in the intercultural office and help them deal with culture shock in Japan, even though I’m kind of in culture shock myself … and then I teach English and help tutor a lot of the university students here.” It’s a big job, one for which Inniss honed myriad skills at SJU. “Saint John’s/Saint Ben’s has equipped me exponentially,” Inniss said. “It was a perfect choice. I don’t think I would have the opportunities I’ve had at any other school than Saint John’s.” Those opportunities included medical internships at the

University of Minnesota (neuroscience), the University of Michigan (gastroenterology) and with the Mayo Clinic Innovations Scholars program. Before entering medical school, Inniss also earned a testimonial from SJU/CSB academic advisor Lisa Scott: “He’s the one student I’ve ever had that I’d let do brain surgery on me.” “I’m thinking neuro, emergency and trauma, and possibly public health and bio tech,” Inniss said. “I can see myself doing one specialty for maybe 20 years and then moving on to a United Nations position with the World Health Organization or something.” For now, Inniss is expanding his overall experience – as did Saint John’s. “You get to actually experience life and self-growth and development,” Inniss said. “It’s something that should be cherished.” (Above) Donovan Inniss was joined in Collegeville by his family – (from left) sister Denaé Inniss, father Dwight Inniss, Donovan Inniss ’18, mother Tenisha Hanna-Inniss and brother Devyn Inniss – at graduation May 2018.