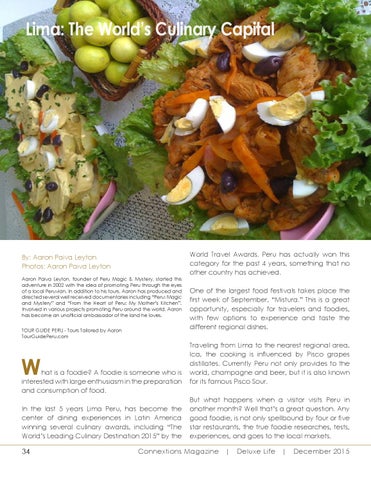 By: Aaron Paiva Leyton Photos: Aaron Paiva Leyton Aaron Paiva Leyton, founder of Peru Magic & Mystery, started this adventure in 2002 with the idea of promoting Peru through the eyes of a local Peruvian. In addition to his tours, Aaron has produced and directed several well received documentaries including “Peru: Magic and Mystery” and “From the Heart of Peru: My Mother’s Kitchen”. Involved in various projects promoting Peru around the world, Aaron has become an unofficial ambassador of the land he loves. TOUR GUIDE PERU - Tours Tailored by Aaron TourGuidePeru.com

hat is a foodie? A foodie is someone who is interested with large enthusiasm in the preparation and consumption of food. In the last 5 years Lima Peru, has become the center of dining experiences in Latin America winning several culinary awards, including “The World’s Leading Culinary Destination 2015” by the

World Travel Awards. Peru has actually won this category for the past 4 years, something that no other country has achieved. One of the largest food festivals takes place the first week of September, “Mistura.” This is a great opportunity, especially for travelers and foodies, with few options to experience and taste the different regional dishes. Traveling from Lima to the nearest regional area, Ica, the cooking is influenced by Pisco grapes distillates. Currently Peru not only provides to the world, champagne and beer, but it is also known for its famous Pisco Sour. But what happens when a visitor visits Peru in another month? Well that’s a great question. Any good foodie, is not only spellbound by four or five star restaurants, the true foodie researches, tests, experiences, and goes to the local markets.