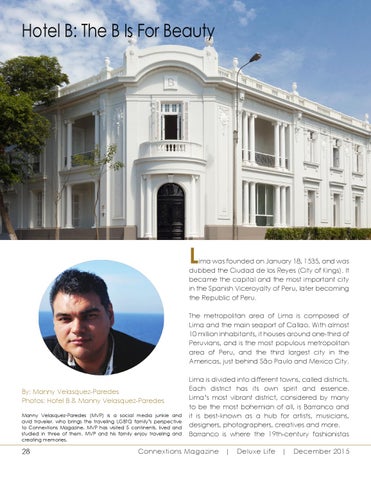 Capturing Love Hotel B: TheYour B Is For Beauty

ima was founded on January 18, 1535, and was dubbed the Ciudad de los Reyes (City of Kings). It became the capital and the most important city in the Spanish Viceroyalty of Peru, later becoming the Republic of Peru. The metropolitan area of Lima is composed of Lima and the main seaport of Callao. With almost 10 million inhabitants, it houses around one-third of Peruvians, and is the most populous metropolitan area of Peru, and the third largest city in the Americas, just behind SĂŁo Paulo and Mexico City.

Lima is divided into different towns, called districts. Each district has its own spirit and essence. Limaâ&#x20AC;&#x2122;s most vibrant district, considered by many to be the most bohemian of all, is Barranco and it is best-known as a hub for artists, musicians, designers, photographers, creatives and more. Barranco is where the 19th-century fashionistas