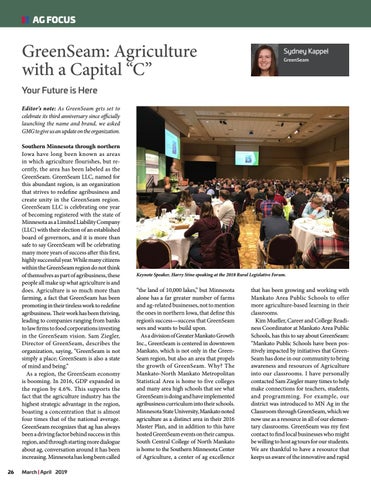 GreenSeam: Agriculture with a Capital “C”

Your Future is Here Editor’s note: As GreenSeam gets set to celebrate its third anniversary since officially launching the name and brand, we asked GMG to give us an update on the organization. Southern Minnesota through northern Iowa have long been known as areas in which agriculture flourishes, but recently, the area has been labeled as the GreenSeam. GreenSeam LLC, named for this abundant region, is an organization that strives to redefine agribusiness and create unity in the GreenSeam region. GreenSeam LLC is celebrating one year of becoming registered with the state of Minnesota as a Limited Liability Company (LLC) with their election of an established board of governors, and it is more than safe to say GreenSeam will be celebrating many more years of success after this first, highly successful year. While many citizens within the GreenSeam region do not think of themselves as part of agribusiness, these people all make up what agriculture is and does. Agriculture is so much more than farming, a fact that GreenSeam has been promoting in their tireless work to redefine agribusiness. Their work has been thriving, leading to companies ranging from banks to law firms to food corporations investing in the GreenSeam vision. Sam Ziegler, Director of GreenSeam, describes the organization, saying, “GreenSeam is not simply a place; GreenSeam is also a state of mind and being.” As a region, the GreenSeam economy is booming. In 2016, GDP expanded in the region by 4.6%. This supports the fact that the agriculture industry has the highest strategic advantage in the region, boasting a concentration that is almost four times that of the national average. GreenSeam recognizes that ag has always been a driving factor behind success in this region, and through starting more dialogue about ag, conversation around it has been increasing. Minnesota has long been called 26

“the land of 10,000 lakes,” but Minnesota alone has a far greater number of farms and ag-related businesses, not to mention the ones in northern Iowa, that define this region’s success—success that GreenSeam sees and wants to build upon. As a division of Greater Mankato Growth Inc., GreenSeam is centered in downtown Mankato, which is not only in the GreenSeam region, but also an area that propels the growth of GreenSeam. Why? The Mankato-North Mankato Metropolitan Statistical Area is home to five colleges and many area high schools that see what GreenSeam is doing and have implemented agribusiness curriculum into their schools. Minnesota State University, Mankato noted agriculture as a distinct area in their 2016 Master Plan, and in addition to this have hosted GreenSeam events on their campus. South Central College of North Mankato is home to the Southern Minnesota Center of Agriculture, a center of ag excellence

that has been growing and working with Mankato Area Public Schools to offer more agriculture-based learning in their classrooms. Kim Mueller, Career and College Readiness Coordinator at Mankato Area Public Schools, has this to say about GreenSeam: “Mankato Public Schools have been positively impacted by initiatives that GreenSeam has done in our community to bring awareness and resources of Agriculture into our classrooms. I have personally contacted Sam Ziegler many times to help make connections for teachers, students, and programming. For example, our district was introduced to MN Ag in the Classroom through GreenSeam, which we now use as a resource in all of our elementary classrooms. GreenSeam was my first contact to find local businesses who might be willing to host ag tours for our students. We are thankful to have a resource that keeps us aware of the innovative and rapid 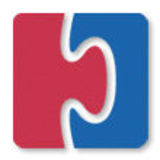