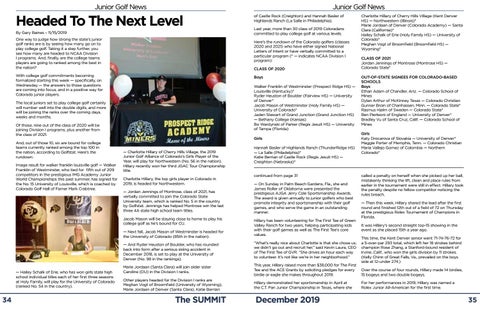 Headed To The Next Level By Gary Baines – 11/15/2019 One way to judge how strong the state’s junior golf ranks are is by seeing how many go on to play college golf. Taking it a step further, you see how many are headed to NCAA Division I programs. And, finally, are the college teams players are going to ranked among the best in the nation?

Image result for walker franklin louisville golf — Walker Franklin of Westminster, who tied for fifth out of 209 competitors in the prestigious IMG Academy Junior World Championships this past summer, has signed for the No. 15 University of Louisville, which is coached by Colorado Golf Hall of Famer Mark Crabtree.

Girls — Charlotte Hillary of Cherry Hills Village, the 2019 Junior Golf Alliance of Colorado’s Girls Player of the Year, will play for Northwestern (No. 56 in the nation). Hillary recently won her third JGAC Tour Championship title. Charlotte Hillary, the top girls player in Colorado in 2019, is headed for Northwestern. — Jordan Jennings of Montrose, class of 2021, has verbally committed to join the Colorado State University team, which is ranked No. 5 in the country by Golfstat. Jennings has helped Montrose win the last three 4A state high school team titles. Jacob Mason will be staying close to home to play his college golf as he’s bound for CU.

— Hailey Schalk of Erie, who has won girls state high school individual titles each of her first three seasons at Holy Family, will play for the University of Colorado (ranked No. 54 in the country).

Last year, more than 30 class of 2019 Coloradans committed to play college golf at various levels. Here’s the rundown of the Colorado golfers (classes 2020 and 2021) who have either signed National Letters of Intent or have verbally committed to a particular program (* — indicates NCAA Division I program):

With college golf commitments becoming formalized starting this week — specifically, on Wednesday — the answers to those questions are coming into focus, and in a positive way for Colorado junior players.

And, out of those 10, six are bound for college teams currently ranked among the top 100 in the nation, according to Golfstat. Here’s the rundown:

Hannah Basler of Highlands Ranch (ThunderRidge HS) — La Salle (Philadelphia)* Katie Berrian of Castle Rock (Regis Jesuit HS) — Creighton (Nebraska)* continued from page 31 — On Sunday in Palm Beach Gardens, Fla., she and James Roller of Oklahoma were presented the prestigious AJGA Jerry Cole Sportsmanship Awards. The award is given annually to junior golfers who best promote integrity and sportsmanship with their golf games, and who serve the game in an outstanding manner.

— Next fall, Jacob Mason of Westminster is headed for the University of Colorado (85th in the nation).

Hillary has been volunteering for The First Tee of Green Valley Ranch for two years, helping participating kids with their golf games as well as The First Tee’s core values.

— And Ryder Heuston of Boulder, who has rounded back into form after a serious skiing accident in December 2018, is set to play at the University of Denver (No. 98 in the rankings).

“What’s really nice about Charlotte is that she chose us; we didn’t go out and recruit her,” said Kevin Laura, CEO of The First Tee of GVR. “She drives an hour each way to volunteer. It’s not like we’re in her neighborhood.”

This year, Hillary raised more than $38,000 for The First Tee and the ACE Grants by soliciting pledges for every birdie or eagle she makes throughout 2019.

Other players headed for the Division I ranks are Meghan Vogt of Broomfield (University of Wyoming), Marie Jordaan of Denver (Santa Clara), Katie Berrian

Hillary demonstrated her sportsmanship in April at the C.T. Pan Junior Championship in Texas, where she

called a penalty on herself when she picked up her ball, mistakenly thinking the lift, clean and place rules from earlier in the tournament were still in effect. Hillary took the penalty despite no fellow competitor noticing the rules breach. — Then this week, Hillary shared the lead after the first round and finished 12th out of a field of 72 on Thursday at the prestigious Rolex Tournament of Champions in Florida. It was Hillary’s second straight top-15 showing in the event as she placed 15th a year ago. This time, the Kent Denver senior went 71-74-76-72 for a 5-over-par 293 total, which left her 18 strokes behind champion Rose Zhang, a Stanford-bound resident of Irvine, Calif., who won the girls division by 11 strokes. (Kelly Chinn of Great Falls, Va., prevailed on the boys side at 12-under 274.) Over the course of four rounds, Hillary made 14 birdies, 15 bogeys and two double bogeys. For her performances in 2019, Hillary was named a Rolex Junior All-American for the first time.