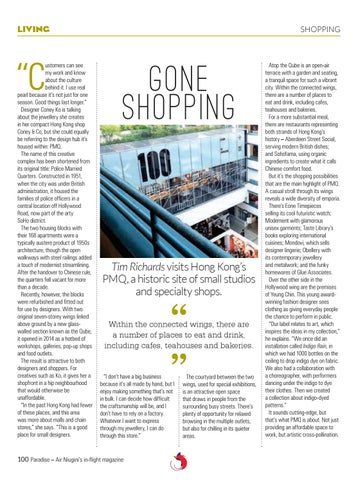 ustomers can see my work and know about the culture behind it. I use real pearl because it’s not just for one season. Good things last longer.” Designer Coney Ko is talking about the jewellery she creates in her compact Hong Kong shop Coney & Co, but she could equally be referring to the design hub it’s housed within: PMQ. The name of this creative complex has been shortened from its original title: Police Married Quarters. Constructed in 1951, when the city was under British administration, it housed the families of police officers in a central location off Hollywood Road, now part of the arty SoHo district. The two housing blocks with their 168 apartments were a typically austere product of 1950s architecture, though the open walkways with steel railings added a touch of modernist streamlining. After the handover to Chinese rule, the quarters fell vacant for more than a decade. Recently, however, the blocks were refurbished and fitted out for use by designers. With two original seven-storey wings linked above ground by a new glasswalled section known as the Qube, it opened in 2014 as a hotbed of workshops, galleries, pop-up shops and food outlets. The result is attractive to both designers and shoppers. For creatives such as Ko, it gives her a shopfront in a hip neighbourhood that would otherwise be unaffordable. “In the past Hong Kong had fewer of these places, and this area was more about malls and chain stores,” she says. “This is a good place for small designers.

Tim Richards visits Hong Kong’s PMQ, a historic site of small studios and specialty shops. Within the connected wings, there are a number of places to eat and drink, including cafes, teahouses and bakeries.

“I don’t have a big business because it’s all made by hand, but I enjoy making something that’s not in bulk. I can decide how difficult the craftsmanship will be, and I don’t have to rely on a factory. Whatever I want to express through my jewellery, I can do through this store.”

The courtyard between the two wings, used for special exhibitions, is an attractive open space that draws in people from the surrounding busy streets. There’s plenty of opportunity for relaxed browsing in the multiple outlets, but also for chilling in its quieter areas.

Atop the Qube is an open-air terrace with a garden and seating, a tranquil space for such a vibrant city. Within the connected wings, there are a number of places to eat and drink, including cafes, teahouses and bakeries. For a more substantial meal, there are restaurants representing both strands of Hong Kong’s history – Aberdeen Street Social, serving modern British dishes; and Sohofama, using organic ingredients to create what it calls Chinese comfort food. But it’s the shopping possibilities that are the main highlight of PMQ. A casual stroll through its wings reveals a wide diversity of emporia. There’s Eone Timepieces selling its cool futuristic watch; Modement with glamorous unisex garments; Taste Library’s books exploring international cuisines; Mondovi, which sells designer lingerie; Obellery with its contemporary jewellery and metalwork; and the funky homewares of Glue Associates. Over the other side in the Hollywood wing are the premises of Yeung Chin. This young awardwinning fashion designer sees clothing as giving everyday people the chance to perform in public. “Our label relates to art, which inspires the ideas in my collection,” he explains. “We once did an installation called Indigo Rain, in which we had 1000 bottles on the ceiling to drop indigo dye on fabric. We also had a collaboration with a choreographer, with performers dancing under the indigo to dye their clothes. Then we created a collection about indigo-dyed patterns.” It sounds cutting-edge, but that’s what PMQ is about. Not just providing an affordable space to work, but artistic cross-pollination.

The September/October 2018 Issue (Vol 5, 2018) of 'Paradise' magazine, the in-flight magazine of Air Niugini, the national airline of Papua...

The September/October 2018 Issue (Vol 5, 2018) of 'Paradise' magazine, the in-flight magazine of Air Niugini, the national airline of Papua...