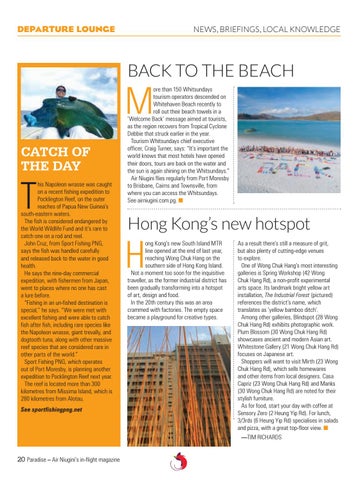 Back to the beach

M Catch of the day

his Napoleon wrasse was caught on a recent fishing expedition to Pocklington Reef, on the outer reaches of Papua New Guinea’s south-eastern waters. The fish is considered endangered by the World Wildlife Fund and it’s rare to catch one on a rod and reel. John Cruz, from Sport Fishing PNG, says the fish was handled carefully and released back to the water in good health. He says the nine-day commercial expedition, with fishermen from Japan, went to places where no one has cast a lure before. “Fishing in an un-fished destination is special,’’ he says. “We were met with excellent fishing and were able to catch fish after fish, including rare species like the Napoleon wrasse, giant trevally, and dogtooth tuna, along with other massive reef species that are considered rare in other parts of the world.” Sport Fishing PNG, which operates out of Port Moresby, is planning another expedition to Pocklington Reef next year. The reef is located more than 300 kilometres from Missima Island, which is 280 kilometres from Alotau. See sportfishingpng.net

ore than 150 Whitsundays tourism operators descended on Whitehaven Beach recently to roll out their beach towels in a ‘Welcome Back’ message aimed at tourists, as the region recovers from Tropical Cyclone Debbie that struck earlier in the year. Tourism Whitsundays chief executive officer, Craig Turner, says: “It’s important the world knows that most hotels have opened their doors, tours are back on the water and the sun is again shining on the Whitsundays.” Air Niugini flies regularly from Port Moresby to Brisbane, Cairns and Townsville, from where you can access the Whitsundays. See airniugini.com.pg. n

ong Kong’s new South Island MTR line opened at the end of last year, reaching Wong Chuk Hang on the southern side of Hong Kong Island. Not a moment too soon for the inquisitive traveller, as the former industrial district has been gradually transforming into a hotspot of art, design and food. In the 20th century this was an area crammed with factories. The empty space became a playground for creative types.