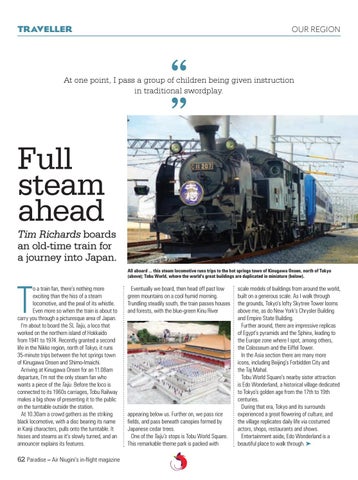 At one point, I pass a group of children being given instruction in traditional swordplay.

Tim Richards boards an old-time train for a journey into Japan.

o a train fan, there’s nothing more exciting than the hiss of a steam locomotive, and the peal of its whistle. Even more so when the train is about to carry you through a picturesque area of Japan. I’m about to board the SL Taiju, a loco that worked on the northern island of Hokkaido from 1941 to 1974. Recently granted a second life in the Nikko region, north of Tokyo, it runs 35-minute trips between the hot springs town of Kinugawa Onsen and Shimo-Imaichi. Arriving at Kinugawa Onsen for an 11.08am departure, I’m not the only steam fan who wants a piece of the Taiju. Before the loco is connected to its 1960s carriages, Tobu Railway makes a big show of presenting it to the public on the turntable outside the station. At 10.30am a crowd gathers as the striking black locomotive, with a disc bearing its name in Kanji characters, pulls onto the turntable. It hisses and steams as it’s slowly turned, and an announcer explains its features.

All aboard ... this steam locomotive runs trips to the hot springs town of Kinugawa Onsen, north of Tokyo (above); Tobu World, where the world's great buildings are duplicated in miniature (below).

Eventually we board, then head off past low green mountains on a cool humid morning. Trundling steadily south, the train passes houses and forests, with the blue-green Kinu River

appearing below us. Further on, we pass rice fields, and pass beneath canopies formed by Japanese cedar trees. One of the Taiju’s stops is Tobu World Square. This remarkable theme park is packed with

scale models of buildings from around the world, built on a generous scale. As I walk through the grounds, Tokyo’s lofty Skytree Tower looms above me, as do New York’s Chrysler Building and Empire State Building. Further around, there are impressive replicas of Egypt’s pyramids and the Sphinx, leading to the Europe zone where I spot, among others, the Colosseum and the Eiffel Tower. In the Asia section there are many more icons, including Beijing’s Forbidden City and the Taj Mahal. Tobu World Square’s nearby sister attraction is Edo Wonderland, a historical village dedicated to Tokyo’s golden age from the 17th to 19th centuries. During that era, Tokyo and its surrounds experienced a great flowering of culture, and the village replicates daily life via costumed actors, shops, restaurants and shows. Entertainment aside, Edo Wonderland is a beautiful place to walk through.

The January/February 2019 Issue (Vol 1, 2019) of 'Paradise' magazine, the in-flight magazine of Air Niugini, the national airline of Papua N...

The January/February 2019 Issue (Vol 1, 2019) of 'Paradise' magazine, the in-flight magazine of Air Niugini, the national airline of Papua N...