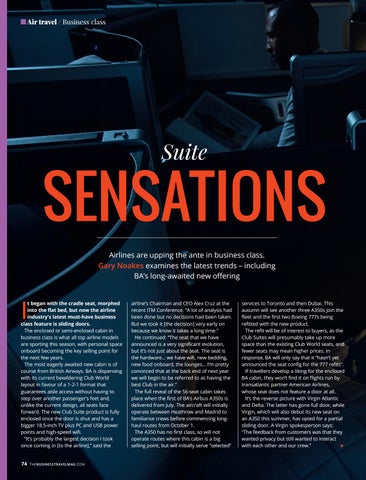 t began with the cradle seat, morphed into the flat bed, but now the airline industry's latest must-have business class feature is sliding doors. The enclosed or semi-enclosed cabin in business class is what all top airline models are sporting this season, with personal space onboard becoming the key selling point for the next few years. The most eagerly awaited new cabin is of course from British Airways. BA is dispensing with its current bewildering Club World layout in favour of a 1-2-1 format that guarantees aisle access without having to step over another passenger’s feet and, unlike the current design, all seats face forward. The new Club Suite product is fully enclosed once the door is shut and has a bigger 18.5-inch TV plus PC and USB power points and high-speed wifi. “It’s probably the largest decision I took since coming in [to the airline],” said the 74

airline’s Chairman and CEO Alex Cruz at the recent ITM Conference. “A lot of analysis had been done but no decisions had been taken. But we took it [the decision] very early on because we know it takes a long time.” He continued: “The seat that we have announced is a very significant evolution, but it’s not just about the seat. The seat is the hardware... we have wifi, new bedding, new food onboard, the lounges... I’m pretty convinced that at the back end of next year we will begin to be referred to as having the best Club in the air.” The full reveal of the 56-seat cabin takes place when the first of BA’s Airbus A350s is delivered from July. The aircraft will initially operate between Heathrow and Madrid to familiarise crews before commencing longhaul routes from October 1. The A350 has no first class, so will not operate routes where this cabin is a big selling point, but will initially serve “selected”

services to Toronto and then Dubai. This autumn will see another three A350s join the fleet and the first two Boeing 777s being refitted with the new product. The refit will be of interest to buyers, as the Club Suites will presumably take up more space than the existing Club World seats, and fewer seats may mean higher prices. In response, BA will only say that it “hasn’t yet announced the seat config for the 777 refits”. If travellers develop a liking for the enclosed BA cabin, they won’t find it on flights run by transatlantic partner American Airlines, whose seat does not feature a door at all. It’s the reverse picture with Virgin Atlantic and Delta. The latter has gone full door, while Virgin, which will also debut its new seat on an A350 this summer, has opted for a partial sliding door. A Virgin spokesperson says: “The feedback from customers was that they wanted privacy but still wanted to interact with each other and our crew.” 