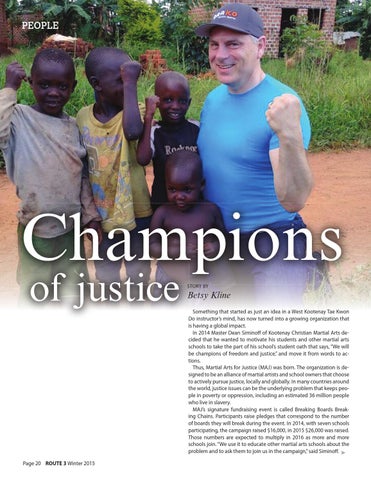 Betsy Kline Something that started as just an idea in a West Kootenay Tae Kwon Do instructor’s mind, has now turned into a growing organization that is having a global impact. In 2014 Master Dean Siminoff of Kootenay Christian Martial Arts decided that he wanted to motivate his students and other martial arts schools to take the part of his school’s student oath that says, “We will be champions of freedom and justice,” and move it from words to actions. Thus, Martial Arts for Justice (MAJ) was born. The organization is designed to be an alliance of martial artists and school owners that choose to actively pursue justice, locally and globally. In many countries around the world, justice issues can be the underlying problem that keeps people in poverty or oppression, including an estimated 36 million people who live in slavery. MAJ’s signature fundraising event is called Breaking Boards Breaking Chains. Participants raise pledges that correspond to the number of boards they will break during the event. In 2014, with seven schools participating, the campaign raised $16,000, in 2015 $26,000 was raised. Those numbers are expected to multiply in 2016 as more and more schools join. “We use it to educate other martial arts schools about the problem and to ask them to join us in the campaign,” said Siminoff. ➤