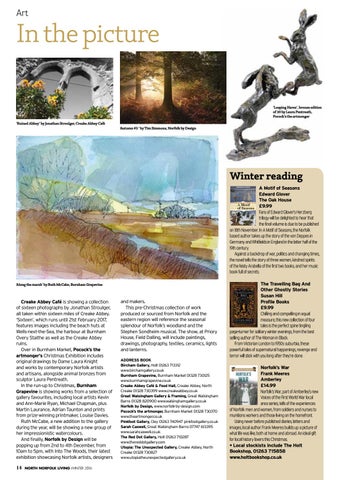 Winter reading A Motif of Seasons Edward Glover The Oak House A Motif of Sea{on{ £9.99 Fans of Edward Glover’s Herzberg trilogy will be delighted to hear that the final volume is due to be published on 18th November. In A Motif of Seasons, the Norfolk based author takes up the story of the von Deppes in Germany and Whitfields in England in the latter half of the 19th century. Against a backdrop of war, politics and changing times, the novel tells the story of three women, kindred spirits of the feisty Arabella of the first two books, and her music book full of secrets. EDWA RD G LOV ER

‘Along the marsh’ by Ruth McCabe, Burnham Grapevine

Creake Abbey Café is showing a collection of sixteen photographs by Jonathan Stroulger, all taken within sixteen miles of Creake Abbey. ‘Sixteen’, which runs until 21st February 2017, features images including the beach huts at Wells-next-the-Sea, the harbour at Burnham Overy Staithe as well as the Creake Abbey ruins. Over in Burnham Market, Pocock’s the artmonger’s Christmas Exhibition includes original drawings by Dame Laura Knight and works by contemporary Norfolk artists and artisans, alongside animal bronzes from sculptor Laura Pentreath. In the run-up to Christmas, Burnham Grapevine is showing works from a selection of gallery favourites, including local artists Kevin and Ann-Marie Ryan, Michael Chapman, plus Martin Laurance, Adrian Taunton and prints from prize-winning printmaker, Louise Davies. Ruth McCabe, a new addition to the gallery during the year, will be showing a new group of her impressionistic watercolours. And finally, Norfolk by Design will be popping up from 2nd to 4th December, from 10am to 5pm, with Into The Woods, their latest exhibition showcasing Norfolk artists, designers

The Travelling Bag And Other Ghostly Stories Susan Hill Profile Books £9.99 Chilling and compelling in equal measure, this new collection of four tales is the perfect spine tingling page-turner for solitary winter evenings, from the best selling author of The Woman in Black. From Victorian London to 1950s suburbia, these powerful tales of supernatural happenings, revenge and terror will stick with you long after they’re done. Norfolk’s War Frank Meeres Amberley £14.99 Norfolk’s War, part of Amberley’s new Voices of the First World War local area series, tells of the experiences of Norfolk men and women, from soldiers and nurses to munitions workers and those living on the homefront. Using never before published diaries, letters and images, local author Frank Meeres builds up a picture of what life was like, both at home and abroad. An ideal gift for local history lovers this Christmas. • Local stockists include The Holt Bookshop, 01263 715858 www.holtbookshop.co.uk 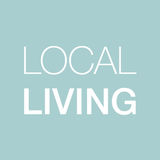