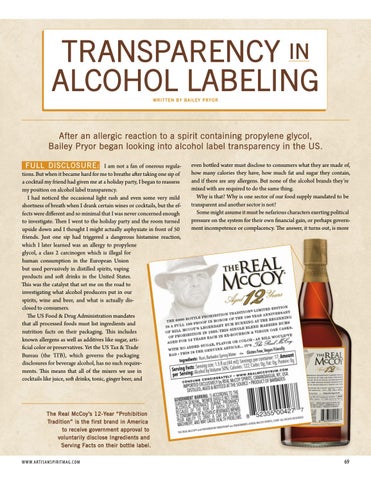 After an allergic reaction to a spirit containing propylene glycol, Bailey Pryor began looking into alcohol label transparency in the US. FULL DISCLOSURE: I am not a fan of onerous regulations. But when it became hard for me to breathe after taking one sip of a cocktail my friend had given me at a holiday party, I began to reassess my position on alcohol label transparency. I had noticed the occasional light rash and even some very mild shortness of breath when I drank certain wines or cocktails, but the effects were different and so minimal that I was never concerned enough to investigate. Then I went to the holiday party and the room turned upside down and I thought I might actually asphyxiate in front of 50 friends. Just one sip had triggered a dangerous histamine reaction, which I later learned was an allergy to propylene glycol, a class 2 carcinogen which is illegal for human consumption in the European Union but used pervasively in distilled spirits, vaping products and soft drinks in the United States. This was the catalyst that set me on the road to investigating what alcohol producers put in our spirits, wine and beer, and what is actually disclosed to consumers. The US Food &amp; Drug Administration mandates that all processed foods must list ingredients and nutrition facts on their packaging. This includes known allergens as well as additives like sugar, artificial color or preservatives. Yet the US Tax &amp; Trade Bureau (the TTB), which governs the packaging disclosures for beverage alcohol, has no such requirements. This means that all of the mixers we use in cocktails like juice, soft drinks, tonic, ginger beer, and

even bottled water must disclose to consumers what they are made of, how many calories they have, how much fat and sugar they contain, and if there are any allergens. But none of the alcohol brands they’re mixed with are required to do the same thing. Why is that? Why is one sector of our food supply mandated to be transparent and another sector is not? Some might assume it must be nefarious characters exerting political pressure on the system for their own financial gain, or perhaps government incompetence or complacency. The answer, it turns out, is more

The Real McCoy’s 12-Year “Prohibition Tradition” is the first brand in America to receive government approval to voluntarily disclose Ingredients and Serving Facts on their bottle label. WWW.ART ISANSP IRITMAG.COM